MS Lake Pearl is a Pearl-class ship, built for and owned by Nansei Cruise Lines.

She is the lead of, and named after, her ship class. 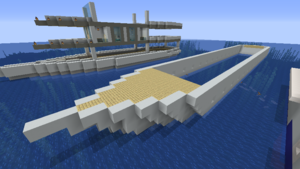 Lake Pearl under construction on April 20, 2021, next to Veintinueve de Mayo

Lake Pearl's keel was laid on April 19, 2021, and she was built from the ground up. Originally, she was meant to be 50m, have 3 decks and be called the Venus, but this was changed to 80m, 4 decks, and Lake Pearl during construction. This tripled her stateroom count from 20 to 60. Her stern design was also changed to be concave instead of convex like her older Ruby-class cousins. Her bow was built by Royal Nanseisian, and the rest of her was built by Wenyanga Shipyards. She was built in between her two rivals, the 60m Veintinueve de Mayo, and the 120m Royal Nanseisian Unity of the Seas.

A fifth deck was added as there was space for it, increasing her gross tonnage. She was fitted out, and construction finished on April 21, two days later. She was christened in Wenyanga on April 23, 2021, by New Singapore mayor LKRandom. She made her maiden voyage from New Singapore on April 25, becoming the world's largest cruise ship the same day.

On May 9, she lost her title to MS Azalea Arctic, but regained it on May 12 due to changes in how ship size is calculated. She became the first cruise ship to be weighed, measured at 8,762 gross tonnes, and because no other ship had been weighed yet, she briefly regained the title until Azalea Arctic was weighted at 26,635 gross tonnes.

She has two sisters, Lake Sapphire and Lake Topaz, who are both larger than her, Topaz by a whole 24m

Lake Pearl currently sails 7-night cruises from Shahai, her home port. Before, she sailed out of New Singapore, but this was changed once Shahai Cruise Terminal was pasted because it had much better facilities than New Singapore.

Deck 1 of Lake Pearl contains the Mall-at-Sea, a mall filled with other player-made brands. NCL opened up Deck 1 to players on a 'first-come, first-serve' basis, with players able to choose an empty spot and add a franchise there for free without prior consulting. The casino, built late into the ship's construction, is one of the most popular areas on the ship. The entrance to the ship, the elevators, and male and female bathrooms are other noteworthy features on Deck 1.

Deck 2 and 3 contain 30 staterooms each, for a total of 60. Each stateroom is 2x2, and contains a chest and a bed. While this setup has been described as 'tight', NCL had to put it in to conform to size restrictions on the width of the ship. Deck 2 also has an entrance to the helipad, on the bow of the ship.

Deck 4 contains the bridge, which is forbidden to passengers. It also contains Nice Cream, an ice-cream shop, Bridge Buffet, a restaurant, and GreenSea, the first garden at sea.

Deck 5 is only accessible via stairs from Deck 4. It contains a 2m deep adult pool, a 1m deep kiddies pool (complete with 'Nellie the Elephant'), deckchairs, streetlamps, and the famous Top Deck, an NCL-owned luxury buffet featured on the top deck of all their ships. 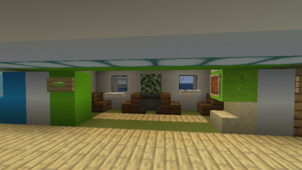 Instant Ribbits, one of the restaurants on Deck 1 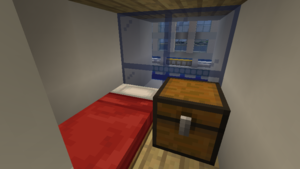 A stateroom on Deck 3 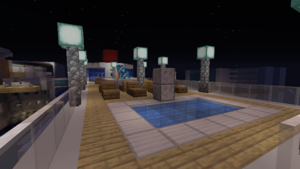 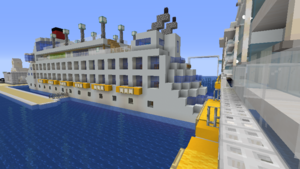 Lake Pearl collision as seen from Unity of the Seas

Lake Pearl's construction was halted on the first day, as it was feared that Royal Nanseisian's MS Unity of the Seas was too close. The situation was resolved, and construction resumed the next day.

Collision with Unity of the Seas

Unity of the Seas was moved to the dock next to Lake Pearl, where she was fixed up. However, this took out Lake Pearl's stern, requiring a refit of the stern, and costing NCL another 20 million rand. After the incident, Wenyanga Shipyards was ordered to move all under construction ships into their respective docks at the cruise terminal.

It is now forbidden to construct a ship outside of its dock in Wenyanga.