Manukau Transport is Frontier Group's transit division as well as Derpy Enterprises' intercity train division. Founded officially on December 18th, 2016, its roots can be traced back to Arrivé, a transit company which at its peak was jointly owned by GopherCorp, Feline Holdings, and Frontier Group. Manukau provides intercity rail and bus services, and is headed by three CEOs: Soleurs and JohnNotTech from Frontier Group, and Derpy_Melon from Derpy Enterprises.

The company is currently in a stage of research, development, and outreach. Town and city mayors who wish to be served by Manukau are requested to use our talk page to notify us at their earliest convenience. Alternatively, authorized parties may contact Soleurs or JohnNotTech by Discord or /mail for bus services, and Derpy_Melon or JohnNotTech for rail services. Manukau is also studying the feasibility of implementing other forms of transport services, including water taxis and ferries; however, Manukau does not plan on offering local transit services, such as local buses and metros, within the near future.

Manukau Buses is the busing division of Manukau, headed primarily by Soleurs and wholly owned by Frontier Group.

Manukau Trains is the railway division of Manukau. Headed by Derpy_Melon and JohnNotTech, the division is jointly owned by Frontier Group and Derpy Enterprises, and plans on providing high-quality warp train services to areas throughout the server. Furthermore, for cities that don't allow warp trains or are not currently eligible for such service, Manukau Trains intends to cooperate with the relevant parties to provide service to such cities through the use of buses or minecart-based rail services. This will likely include services that run via CitiRail infrastructure, taking advantage of the widely available railway infrastructure that is already in place, as well as shuttle services operated by fellow Manukau Transport division Manukau Buses.

Manukau is in the process of developing rolling stock appropriate for the warp train services it intends to provide. Plans currently include both 3-meter and 5-meter wide train cars, for use as Manukau sees fit. More information will be added as it becomes available.

Manukau Trains is currently in its planning stage. As such, the scope of Manukau's service is not limited to what has been made publicly available here, and all information shown is subject to change. However, these listings are representative of the plans we currently have. 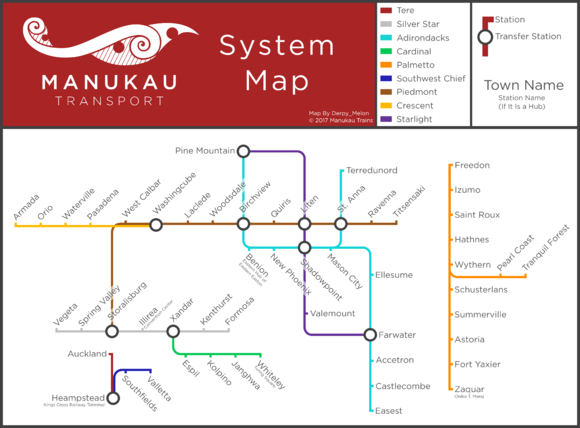 A Map of the Planned Routes
Information May Be Outdated, Refer To Tables For Real-Time Info

1This station will be bypassed until further notice. Shuttle service may be available for some stations.

Manukau Ferries is the ferry division of Manukau, headed primarily by QueenSmae and wholly owned by Frontier Group.