Manumanu is an island in the Northern Ocean that is a part of the town of Itokani. Owned by MinecraftYoshi26, the island was the second settlement for Itokani. The island began construction on April 4, 2020, and was completed on May 3, 2020.

Manumanu is notable for being the fauna and flora-filled island of Itokani and having Pablo Memorial National Park.

The Pablo Memorial at the center of the island

When planning the region, MinecraftYoshi26 wanted to make this island a nature-focused island, with an abundance of flora and fauna. After finishing the island of Karakarawa, Manumanu was claimed on April 4, 2020.

When minor construction started, the island was deforested and cleared of grass and small water ponds. The lava pool that originally existed was kept. The land had some minor smoothing with world edit, making the island less hilly. A few animals on the island that were spawned there naturally were kept and still roam the island. 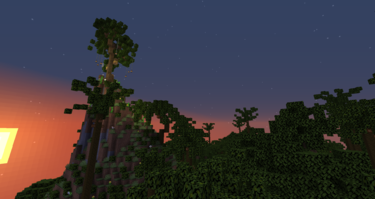 The Tree of Time atop Galili Mountain

The island was given a nature revamp, as Galili Mountain was created to be the highest peak on the island. After all of the paths were placed and connected, jungle leaves, grass, oxeye daisies, dandelions, and lilies of the valley were used to decorate the grounds. Following that, approximately 16 different types of palm trees and oak trees were placed to make the island heavily forested and dense.

The island was declared as completed in less than 72 hours after major construction began on May 3, 2020, after the Aroma Coffee was placed.

The majority of the island is in the Pablo Memorial Nature Preserve. Its name serves as a memorial honoring a named bee on _Kastle's survival server that died.

Some places on the island are references to pop culture. Two of the village houses in Itiko Village are references to pet names, while the other is named after a villager from the video game franchise Animal Crossing. The residence on top of Galili Mountain, Toph's Home is a reference to a character in the media franchise Avatar: The Last Airbender. The unmarked Tree of Time at the top of Galili Mountain is named after a tree from the same franchise.

In the southwest, the unmarked Vakayawan Ruins is a reference to the MRT game show Survivor: Vakayawa.

Manumanu is located in the Northern Ocean. It is the north-westernmost island in the region of Senikau. It is one of the few islands in the region that does not have land that touches a lukewarm or warm ocean. The waters surrounding the island are either a deep ocean or ocean biome. 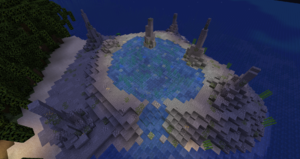 Attractions on the island include the Pablo Memorial in the center of the island and the Koula Hot Springs in the southeast. The Pablo Memorial is a large statue of a Minecraft bee made out of stone. The Koula Hot Springs is a bubbling pool of water known for its hot, relaxing temperature and atmosphere. The bright hot springs are filled with natural yellow plants and ores.

The other major point on the island is the Manumanu Itokan Memorial Graveyard. It is a historical native site with native Itokans being buried there.

The only exit from the island is through the Manumanu Main Dock in the western portion of the island. The Itokani Local Transit boats take passengers to other islands in the city of Itokani. Manumanu is only connected to Waitui by boat.