Mason City (often abbreviated to MC or Mason) is located at C12 and the mayor is AlfiePops. It was founded on October 4th when the new world was launched. Once the city was promoted to Councillor status, Tarheelscouse was promoted to deputy mayor. After the inauguration of Tarheelscouse, On November 4th, Mason City became a Mayor qualifying city. 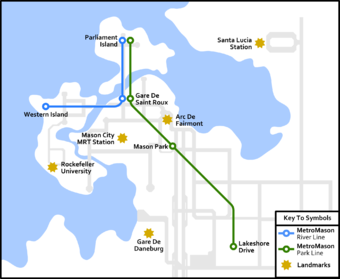 A map of Mason City including landmarks and MetroMason

Western Island was Mason City's first island, and had many of the initial ten builds. The island was connected to Downtown Island by the Fairfax Bridge on October 5th. On West Street, the franchise Mason City's West Street Bakery has its first location. [ Downtown Island was Mason City's second district and features commercial development. Downtown Island is not actually an island, but a peninsula. The MRT and Gare Du Saint Roux can be accessed here. DuPont Circle is a major intersection of three streets: Lance-Campbell Avenue, DuPont Street, and Vienna Avenue. Columbus Tower and The Music3_0 Buildings overlook DuPont Circle. Parliament Island was Mason City's third district. Parliament Island has Embassies, luxury apartments, and government buildings in european architecture. Many franchises, theaters, and apartments are on this island. The Mason Heights area is abundant with Apartments, Single Family Homes, and Offices. Mason Heights' two major streets are DuPont Street and Fairmont Street. 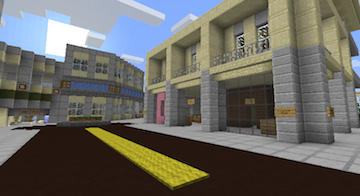 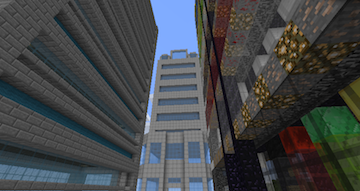 Mason City is lead by a Mayor with chief authority. This position is held by Kiwirainbow and will be retained permanently unless determined otherwise by him . The Mayor has a variety of advisors that help him make decisions, each with their own powers.

Advisors to the Mayor of Mason City (Note: Listed in order of succession)

The area of foreign affairs is dealt with by the State Department of Mason City. This branch of government is lead by the Mayor and deals with relationships between other cities and states. Currently, the department maintains a neutral stance on most issues and strives to maintain peace throughout the MRT. This is accomplished through building embassies, talks with other leaders, and participation in other organizations that maintain similar values to Mason City. The headquarters of the State Department is located in Embassy Square on Parliament Island. For more information visit: The State Department of Mason City.

The following is a list of theaters and their classification in Mason City.

Mason City Santa Lucia is scheduled to serve all rail lines in Mason City that travel in the East-West direction. MetroMason's River Line is planned to terminate here, as is ConnectEAST's yellow and blue lines.

Mason City Gare de Daneburg services all of Mason City's southbound warp-trains. The station is the largest in the city, stretching all the way to C13.