This article is about the southern region of towns near Lake 49. For the town owned by fork_07 near New Mackinaw, see Meridian. 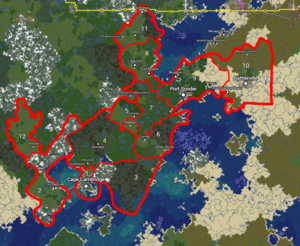 Map of the cities in Meridia

This is a list of the current members of the region.

The only functioning rail operator in the region is NewRail FLR. However, more rail connections are planned, like MARC.

The national airline is JetMeridia. It is owned by PaintedBlue

The main ferry service is MARCBoat.