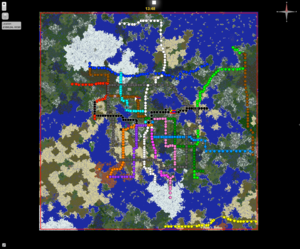 A screenshot of the new world dynmap.

The MRT Dynamic Map, or also known as the Dynmap, is an interactive map which shows all the MRT worlds. It is accessible the site by going to the MRT website and clicking on "World Map", using the in-game link given from the command /map, or using the following link: http://dynmap.minecartrapidtransit.net. On the right, there are options to for different worlds and perspectives. It functions as a way to see projects from the sky, or as a tool to locate cities and players.

There is also a separate dynmap for the Beta Server when it is online at https://dynmap-beta.minecartrapidtransit.net/; however, this map is not rendered.

The main aim of the Dynmap is to help people plan their cities. Players are able to see where already has been built or where maybe remains a spot for building infrastructure and towns. The Dynamic Map can also be used to make your own (static) map of an area or the entire server, usually done by screenshotting and then editing in an image editor program like Paint or Adobe. Because the New World dynmap only renders in full every few months till possibly a year, it is advised to take a look yourself in the area where you want to build (both for free space and the 300/500 blocks town border), and to regularly ask for renders in areas where there has been significant change.

The Dynmap currently displays all open MRT lines, premier cities, and major roads. These can be toggled on/off using the layers button in the top-left of the map.

An important function of Dynmap are the toggable layers. Layers are found in the top left of the screen, on mobile between the zoom buttons and the viewer's location, and, on PC, beneath both. There are 7 types of overlays, and a lot consist of multiple overlays. These overlays may stand for different points on different worlds, or they might be lines on just one.

Players that are online can be seen on the Dynmap and their visibility can be toggled. Note that hidden staff members or staff members in the staff world won't be visible.

This shows the world border for the selected world.

There are two types of official roads on the server. A lot of A-roads, especially close to Central City are marked on the map, which can be seen when toggling the option "National (A) Roads". The second type of roads is usually not shown on the "Local (B) Roads" overlay at the time of speaking.

The backbone of server infrastructure and where the MRT is known for. All New World MRT Lines have their own overlay, and all the MRT lines on the old world together share an overlay as well. Usually MRT lines are visible on dynmap even without the overlay because of their footprint, but the overlay can be really useful for underground parts.

Premier is the highest rank [1] and the few cities that make it all the way get an honourable mention on dynmap as their logo is shown at the city's location.

The spawn locations for each world. This is shown as a star in all the worlds.

For an up to date status of the Dynmap, check the status page.

As an alternative, players can also have a local dynmap render of a town/project. Politely ask a staff member in-game, and they'll be happy to do it.