This article is about the city in Ward 9. For the sovereign state the city is in, see the Republic of Miu Wan.

Miu Wan, is a city founded by HarborRandom852. It is located in the northern areas of the New World specifically in Ward 9. It is the capital of the Republic of Miu Wan located in Miu Wan Capital District.

The town of Miu Wan as founded by HarborRandom852 on May 12th 2020. Harbor had chosen that location in hopes that the Arctic Line would expand there, sadly for him, it went the other way. The terrain was fairly flat near the coasts with a few small hills to the west and north and larger hills to the south. The first area in the town that was built soon became known as Smithfield.

On May 14th 2020, HarborRandom852 found a shrine next to his town dedicated to Mercury. It was covered in fire and "blood". With Echohue's blessing, LKRandom was allowed to destroy the shrine alongside EliteNeon Months later, SilverBubble revealed that it was him that built the shrine.

The first recorded Tianamen Square Massacre vigil on the MRT Server was held in Miu Wan at around 9pm UTC+8. As the vigil had technically been cancelled in Hong Kong that year, Harbor decided to hold a vigil on the server in which 2 people attended. Two memorials dedicated to those that died in the massacre were set up.

As Harbor was mostly inactive on the server from June to October, construction on Miu Wan went dormant until Harbor returned in Late October. Harbor set his eyes on one goal: get Miu Wan to Mayor which was achieved on December 25th 2020. Harbor also invited some of his friends from his community: Hongkongggag to partake in a Christmas Dinner alongside some from the server.

On December 27th 2020, HydroLime formally launched linking the town to St. Helena. It was the first transport connection to the town. HydroLime would also expand to more destinations namely New Singapore and Shahai. More transport connections also came to the town via other ferry companies. In January, after a successful IAT, the end terminus and ferry pier of the Lanark-Laclede Express was incorporated into Miu Wan and expansion began to head west and south with the districts of Mortes, Freezington and Wong Kiu being founded.

Furthermore, a railway station was built in Choi Kok although as of April 2021, no railways serve it yet.

An election for Deputy Mayor was held with 8 candidates 2 of them being independents in February of 2021. AlphaDS: an independent candidate, won the election by a landslide and was sworn in on February 15th 2021 replacing mi_aquamarine.

Miu Wan began to rapidly and aggressively expand in Q1 of 2021, more buildings were constructed and areas were filled in. Among these was the Miu Wan MTR which saw rapid construction in early March-late April 2021 expanding from just 1 line with 5 stations to 4 lines with 10 stations. Harbor also attempted to go for Senator which he failed due to a slim majority of 2-3 voting against Miu Wan's promotion.

The B988 also opened during this time making it Miu Wan's first road connection as well as Starling Bay Station of RaiLinQ. An AquaLinQ route was also opened to Seoland.

Taking inspiration from Westbeach, Harbor decided to lease a piece of land to Oshawott_12 as an enclave of the Ottia Islands: Cadnium, mi_aquamarine also got an enclave that being Shengmiao. However, Osha and Harbor argued over the border wall which led to both receiving a L1 warning. Originally, Osha planned to move and regen the area with AlphaDS taking the land, Osha then changed his mind and Cadnium remained.

Looming over their minds and towns however, was USSRGrad, an abandoned Soviet-style town filled with Armor stands with a large wall. As such, Harbor decided to IAT it in hopes of expanding it and making USSRGrad a Bed Town for Miu Wan. This was when Harbor began to turn Miu Wan into a "state" similar to the Republic of Northern Peninsula. Around this time, Harbor also submitted a second application for Senator. Unfortunately, Cadnium, Shengmiao and the Fui Sha District of Miu Wan violated the 300 block rule which led to L2 warnings to Osha and Harbor (they recieved a 3 day ban), a void declaration of Miu Wan's senator application and the removal of the USSRGrad IAT from the April GSM. This ban lasted from April 10th 2021 to April 13th 2021.

A glitched chunk was discovered on May 17th 2021 in Mortes that was dragging the Tps down, Harbor was building a road there but he had to abandon construction soon after. Luckily, it was soon discovered that it fixed by its own though many have suggested it was simply the server acting up. This further emphasized the fact that the area was the most "cursed" on the MRT.

However, the glitched chunk returned though it’s effects have been less severe. It disappears periodically.

On May 24th 2021, Miu Wan finally was promoted to Senator. Almost immediately, Harbor began construction on Miu Wan Kau Heung Airport which despite its name, was still a Senator airfield. The initial airfield took 3 hours to complete though later on during the day, features such as a railway station, franchises and a control tower were added. The first flight from the airfield was a Michigana flight to Oparia.

Harbor began to focus on the Luk Hom area hoping to turn it into a proper CBD. Around the same time, 4 towns were founded within the Republic of Miu Wan by other players. Furthermore, on May 31st, the Miu Wan Grand Prix was held in the city.

The first area to be built in Miu Wan, it is a mostly residential district with some commercial buildings. It is also home to the original town hall. 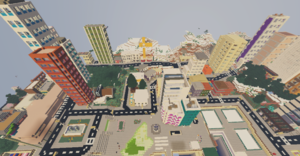 A business district, it is home to many skyscrapers as well as well as Miu Wan Railway Station. It is where Miu Wan's first proper skyscrapers were built. 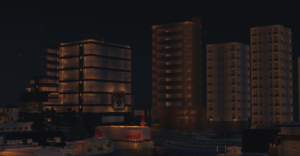 A tourist hotspot with a lovely canal as well as various restaurants and stores. There are of course, residential apartments here. 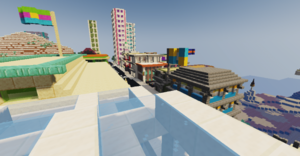 Named after a town from Pokemon Sword and Shield, this district is kind of like the equivalent of Kowloon South in IRL Hong Kong, with malls and hotels to the east and mostly residential buildings to the west and south, it is a "Mojangitis-infected" district. 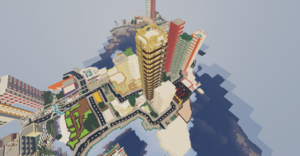 This area contains several old Tong-Lau style housing as well as a few modern buildings. It is also home to Sai Nam Chuen: a hub for Nansei Guntese in Miu Wan. 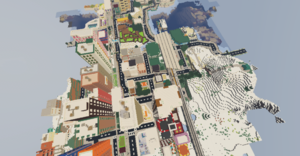 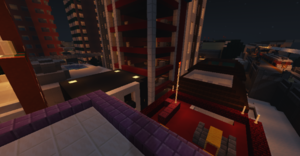 This is home to the City Heliport and Starling Bay RaiLinQ Station. 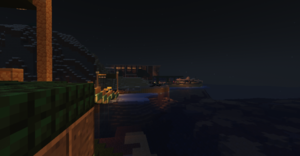 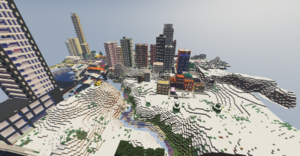 The proper CBD of Miu Wan. It is home to several skyscrapers and governmental buildings. 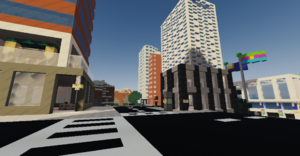 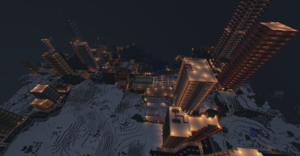 This is the more entertainment side of the city with attractions like the Miu Wan Aquarium as well as embassies. 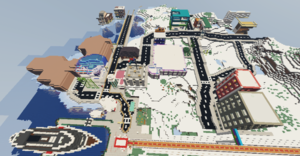 Public housing district with a twist, this area is home to Hong Kong-style public housing obviously but also a small village to the southeast. There is also a cruise wharf. 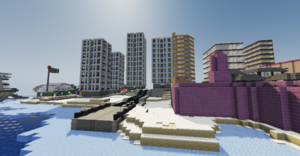 South of Mortes, this is a very undeveloped area for now.

Another fairly undeveloped area although this is partially due to USSRGRAD and the 300 block rule. 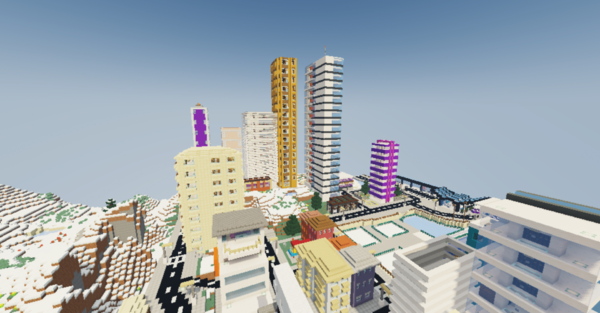 The City Council is elected every 5 years. 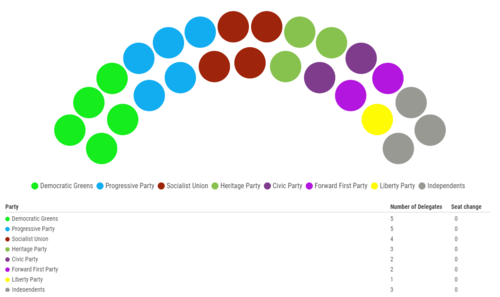 There is a monorail line: the Miu Wan Monorail. There are also streetcar systems in Freezington and Mortes.

A metro system: the Miu Wan MTR is in operation.

There are 2 bus systems that serve Miu Wan Locally: New World Ruff Bus and Citybus. These mostly serve the built up areas of Miu Wan.

Getting To and From

The main point of entry, at least at the moment, is the B988 highway linking Miu Wan from the A92. More highways are being planned and considered for future towns in the Republic of Miu Wan.

Miu Wan also has connections to Seoland and Cape Cambridge via the Seaplane Terminal to the North, near it is a Cruise Wharf that plans to serve Cruise ships. Currently, the Azalea Arctic is docked, it is a part of the cruise from Wenyanga to Dogwood and back via Cape Cambridge and Miu Wan.

RaiLinQ also has a connection in Miu Wan linking it to cities such as PMW City and Wazamawazi at Starling Bay. To the northwest, the rail portion of the Lanark-Laclede Express terminates and transfers to the ferry pier in Mortes. AquaLinQ also has a connection at Starling Bay going to Seoland though it arrives at a different port than the Seaplane.

Miu Wan also has 2 Helicopter connections. One of them connecting Miu Wan to Dogwood and Bristol, the other connecting it to Savage City, Shenghua, Cape Cambridge, Castilion and Lanatam. There is also a bus terminal to the south near Luk Hom which currently has two bus services to Lazure and Westbeach. There may also be a connection to Central City.

There is a railway station in Choi Kok named Miu Wan Station but no railways serve it. There is also another station in Luk Hom that is larger. A railway is also being planned and built to connect Miu Wan to Winterville and Silverville.

BluRail also plans to serve Miu Wan with 2 stations: Miu Wan South which will most likely be located near the under construction Miu Wan South Station and Miu Wan North, which may link up to Miu Wan Station.