Nahuel Huapi National Park (Parque Nacional Nahuel Huapi) is the oldest and most visited park in the Republic of Bahia. Its landscapes represent the only alpine area of Bahia, with around half of the park being composed of Alta Mesa Spruce Forests and the other half containing alpine terrain. Located in the north of the park, Cerro Tronador is the highest peak in Bahia with a summit elevation of 140 meters. Cerro Tronador contains the only major glaciers in Bahia, with the entire summit of the mountain blanketed in a large glacier. The park straddles the Cordillera Blanca de Bahia, and the other major peaks in the park are Cerro Alpamayo and Pico Diente, located in the southwestern portion of the park. Alpamayo Pass in the center of the park is the highest mountain pass in Bahia.

The park derives its name from the llamas that are endemic to the area, which are called Nahuel in the native language. The full name means "llama mountain". 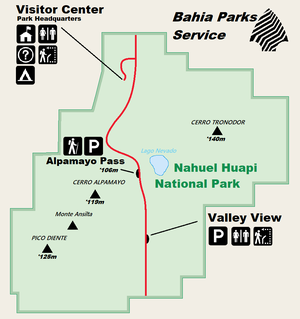 The park covers approximately 30,619 square meters. It is located in the north-central section of the Alta Mesa Province, directly bordering the town of Lago Tronador. The park has three major zones. The northern zone is home to most development in the park, as well as the visitor center and park headquarters. The central zone is located along the Cordillera Blanca De Bahia, and is the highest part of the park. The southern zone contains the Valley View overlook and the Lava Flows trail around the southeast corner of the park. The park is located utop Alta Mesa, the highest mesa in the Republic of Bahia and the only one formed mostly by volcanic activity. To the north of the park is the Tronador Ski Resort, which is the southernmost ski resort on the mrt. Cerro Tronador, in the north of the park, is the highest mountain in the park and in Bahia. Bordering the park to the north is Sequoia Valley National Park. 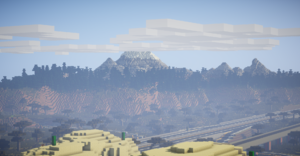 The park is the coldest place in the Republic of Bahia. In the highlands, snow is frequently recorded, and freezing temperatures can be experienced year round.

The park's ecology is unique in bahia, due to its location on the Alta Mesa Plateau. The lower parts of the park are home to the Alta Mesa Spruce Forests, whereas the higher elevation areas are barren. The park is also home to the only population of llamas south of Grisville.