Oparia LeTourneau International Airport, commonly known as Oparia Airport and known by its IATA code OPA, is an airport that currently serves Oparia and the greater North Zeta region. It is one of the airports serving the Metropolitan North Association.

Line 2 of the Oparia Metro also extends into the Downtown, with connections to the North Shore via Line 1.

There is a warp rail station underneath the airport built by chiefbozx, soon to house RailNorth. 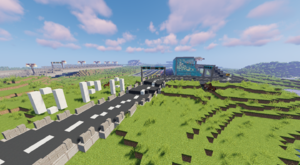 Entrance to the old airfield from the West.

When coming into the airport, Airport Drive splits in two with one lane going up towards the Departures Area and one lane going down to the Arrivals Area. As passengers check-in from the top floor, they pass through security and immigration and take the stairs down to the Gates Area. Arriving passengers simply exit their plane, and find the immigration checkpoint at the southern end of the terminal, and then exit at the bottom floor.

When the airport was first opened, there were only seven gates to assign to a highly saturated airline market. Because of the limited amount of gates and the large amount of airlines, KyleFrb, in conjunction with ManuF_moj, whose cities of Kleinsburg and Rizalburg were promoted to Senator at the same time as Oparia, decided to assign gates with no application process whatsoever. The gates were assigned mostly based on trust and familiarity with the airline operator, but also factored in overall airline activity. 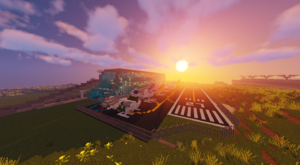 East side of the old airfield at sunset.

This was considered to be controversial by some airline operators, who expressed complaints over the survival of small airlines if this system was continued. Other airline operators were concerned that some airlines didn't get considered fairly. To address all of the complaints, KyleFrb sent a long paragraph into the MRT Transit Discord explaining why he used this system, and telling people to move on.