Palelmo Transit is a transit company owned by Palelmo Inc.Company opened early June 2014 and started making Midcity-Stringcity Line. Currently three stations are in service and it's under construction.In June 8,They joined OneRail community as a member. In June 13,They are added to Stock.

Direct services are two-stationed rail lines with the exception of MineCity,which will have ITA-Style station.For other stations;instead of making stops that make trains wait for a few seconds,You enter from a station to arrive at next (and last) station,and start a new ride to next station from other platform.

Once completed,will serve from Midcity to Stringcity.Extensions may be added later. Please note that Midcity-Minecity and Hamanei-Stringcity sections of rail is not connected.

As an extension to DS1 line,the funicular serves as the only transit line in Okok City.

This line serves the Subterania City, a city built inside a ravine near  G12  Bloomington

Will serve in Chack City.Current plans for route is Observatory to Waterfront,but can be subject to change.

All stations on this line will be replaced to ARM stations.Planning is currently being worked on.

These lines will use ARM. 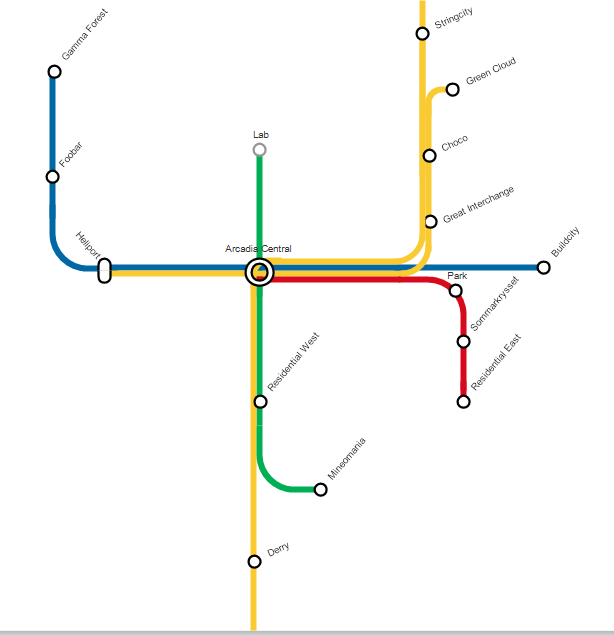 This line will serve Arcadia National Park (which will be built soon) and Sommarkrysset, the largest mall in the Akane Region. It'll be an underground line. Until the park is built, the carts will bypass the park.

It'll be a small line connecting Mineomania South to the lighthouse.Line color will be cyan.More info soon.