Peacopolis International Airport, formerly known as Peacopolis Airfield, is an airfield serving the city of Peacopolis, on the New World. It was built by Airplaneguy9 and managed by his company Ukubhabha Airports Company.

Peacopolis Airfield had been planned back as far as December 2019, when ForesneAir's i____7d decided to start a flight between Peacopolis and neighbouring Foresne, once both towns reached Senator (both towns at this time were Mayor-ranked). This flight was taken up by Lumeva Airlink when ForesneAir merged with Lunaria on January 26, 2020. At this time, FlyLumeva, as it was now called, was hubbing out of Foresne's Omega Hills. The airport had been built, and the terminal replaced, on Lab World, but Foresne failed to get Senator on February 3, meaning the airport that would boost tourism in Lumeva could not be built. This also meant FlyLumeva lost a few flights, and could only start them in the future. When Peacopolis was submitted for Senator, it was Lumeva's last hope of getting commercial flights, since at the time, the closest airfield was New Genisys Airfield, which was some time away from even Stone Bay and Southoak, the closest towns to New Genisys. Even worse, Fort Yaxier International Airport and West Mesa International Airport, the closest international airports, were nearly 30 minutes away by MRT.

Somehow, though, Peacopolis managed to get Senator, with an overwhelming 5-0 from the staff. That day, Airplaneguy9 asked permission from mayor PeacemakerX5 to build the airport, guaranteeing the airport by February 14. Peace accepted, and the airport was built quickly, being finished a day early. The airport used the old FOH terminal, and had six gates, three already taken up. By February 13, the airport was done and ready for pasting. Gate requests went up on the same day. However, Peace noted that the terminal could have another floor, but more importantly, four more gates could be added. In the three hours after gate requests went up, the entire 6-gate field was used up, and the airlines at the four new gates could not start services until they had been built.

The airport was pasted, as scheduled, on February 14. However, as the four extra gates were being built, Airplaneguy9 realised that a fifth gate could be built. Frosty_Creeper10's FlyCreeper took up the gate immediately. On February 14, 2020, at 15:30 GMT, the first aircraft touched down at Peacopolis Airfield: a FlyLumeva Aero A-3 registered 7D-LCA on its delivery flight from the lab world, followed by its sister 7D-LCB, and fellow Lumeva Airlink Aero A-1 7D-LAA. And at 16:20 GMT, FlyCreeper flight FC146, an API RJA-20 registered CA-218FC touched down at Peacopolis Airfield after a six-hour journey from Freedon Silverwood, marking the first commercial flight to touch down. 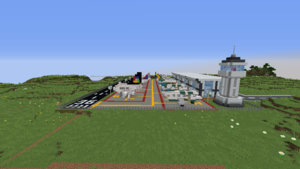 The next day, all of FlyLumeva's and FlyCreeper's flights were set up, the control tower was built, and the road to the airport was finished.

As part of a plan to implement a canal beneath the airport, PeacemakerX5 asked Airplaneguy9 to mark out plans for the proposed Governor expansion, which Airplaneguy9 did. After the city obtained Governor on May 23, 2020, the expansion details were originally to be finalized before it was proposed, however, due to the real-life endeavors of Peace, including examinations, the expansion was put off for many months, until early November. Between May and November, Airplane had built an initial layout for a governor airport expansion, called Expansion Plan A. This plan consisted of the update of the current runway to a taxiway, and support for aircraft as large as the SI-A-300. A new parking area and terminal, consisting of parking of up to six medium aircraft, would be built, and a brand new runway would be built too. This would be only around 20% of airport space, and therefore, the planning committee for the PCE expansion, mostly spearheaded by i____7d, decided to increase this amount to nearly 45% amount of airport space. This new space had almost 120 gates, and is known as Expansion Plan B. On November 20, 2020, the plan was initially rejected by staff for taking too much space due to an inaccurate measurement of the town. A new revised plan, Expansion Plan C, was suggested on August 8th, 2021 by i____7d. This expansion plan would be approximately 45% of the city's air space, allowing it to fit within Peacopolis. The expansion plan would feature an expanded and renovated Terminal 1, a new terminal 2, a brand new terminal 3 for medium planes, and a second parallel runway.

On October 23, the airport was approved, and construction began the next day, beginning by raising the current airfield by 5 blocks to reduce the amount of hills destroyed. The new terminal suffered a setback after it was lost due to the end of MRTLab, but it was recovered and pasted on November 23, a month after approval. Gate requests were opened the same day.

The new expansion would add, among other things, a renovation of T1, new terminals T2 and T3, parking areas for medium aircraft, a new runway, and quick access to the city center via a train underneath the ground.