Pigchinko is a game with long history, which has been bought to the server by Johngi after having long being forgotten. The general concept involves players riding saddled pigs which in turn move in the most retarded and annoying way known to man. Historically, the board would have simply been a wooden board littered with holes, which the pigs would then fall into with no aid, and spectators would bet on the winners. As time has progressed, the game has evolved to include snowballs, which would be thrown around at surrounding pigs and at the player's own pig for them to move.

The game was first spotted on [REDACTED] server around 2010. While at the time there had been many games involving pigs in some way or another, most of them had limited success and were mainly for experimental purposes, mostly due to the saddle item having not been added to Minecraft yet.

When saddles were added, many players attempted to create games involving this first-person perspective. While most of them mainly involved vertical games, Pigchinko was a simple horizontal wooden board, where pigs could walk around for a long time. The game grew quickly, and across the [REDACTED] world, over a dozen arenas were built. 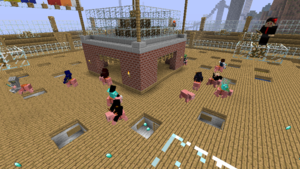 A historical game of Pigchinko.

During Beta 1.8 of Minecraft, there was a bit of a lull as pig behavior did not allow for it to fall into holes, defeating the point of the game. While some formats still could be played, such as the diamond frenzy round pictured to the right, these were not as popular as the other formats.

This was later fixed, leading to an all-new boom in Pigchinko. This time, much of the hard stuff was automated using a plugin, which significantly increased the amount of players and matches.

There are a few general rules to all of the formats, and then each format has a specific goal and special rules. The formats listed are the ones currently playable in the games world arena.

The standard game board has three rings of holes around a central starting platform. The closest and smallest rings are marked by coal, the middle iron and the outer gold. The starting pit has retractable walls to keep the pigs in when the game hasn't started yet. The arena then has a circular wall on the outside.

Race to the edge

The goal of this format is to be the first pig to reach a gold hole on the outer ring. Competitors are allowed snowballs to throw at their own or other pigs, allowing them to change their path or get theirs to move.