Purple Pidgeon is a sit-down restaurant franchise operated by Vickiposa. It specializes in Burgers, Chicken, and Chipfries (French Fries from Larkspur).

It was founded on October 12th, 2018 as Vickiposa wanted some restaraunts to fill out the Timpani district of Larkspur, and built its first location. Its name is inspired off of the American chain Red Robin based in Seattle, Washington. Further locations were soon built outside Larkspur, starting out in Deadbush the day after the first location was founded, however, growth was slow and had only reached 4 locations by the end of 2018, nearly 2 months after the franchise was founded.

However, several significant locations gave much-needed exposure to the franchise, allowing it to grow to 19 locations by the end of January 2019, beginning to sow a reputation as a major proprietor of high-quality custom models to serve transit centers and other important places, with the standard-model locations beginning to fall by the wayside.

In early March 2019, to celebrate 25 locations, its first Flagship location was built in Central City, allowing new guests to be potentially exposed to the franchise nearly as soon as they enter the MRT, however its adoption in other locations was significantly slower, with the first city requesting one being Schillerton two months later.

Purple Pidgeon has a notable partnership with RaiLinQ, which houses a significant portion of its locations. It should be notable however that this isn't an exclusive deal for Purple Pidgeon, which is also featured in multiple IntraRail stations.

This is a selection of all items served at Purple Pidgeon. Note that this is for aesthetic purposes only and not served in-game.

All burgers come with a complimentary order of bottomless Chipfries, which can be substituted for a bowl of fruit, mac n' cheese, or a side salad. All standard buns can be substituted with their gluten-free equivalents upon request.

Formerly, we used to accept requests to open new Purple Pidgeons on the spot, but, starting on March 13th, 2019, we now only accept ones filled out at this form here.

If you order a copy/paste location, you can fill it out and Vicki can build it whenever she can, even if you are offline, and you can pay for it afterward.

In order to occupy the wide variety of settings in which Purple Pidgeons are founded in, there are several types of locations in which may be built. From the standard, to flagships, to custom locations, they all apply to different niches in which one may want a Purple Pidgeon to fill. 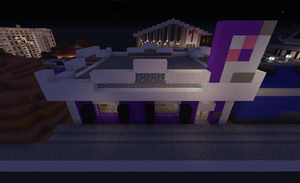 The original style of location that is modeled off the original location in Larkspur but meant to be built whereever and whenever it needed to be. A standard location featuring our full-menu offerings, standalone and iconic with the famous interiors that customers have come to expect. The cost to build a new one is exactly $20 and requires a space 21 meters wide and 20 meters from front to back.

The most popular option offered due to its versatility and ease of construction. With no standard model, these can be built in any situation one wants them to be in, perfect for malls and transit terminals. While it formerly had no regular price, it now costs a $0.1 per square meter of floor space.

Our largest offering opened to celebrate our 25th location, it is primarily a statement to those around you of how much you love Purple Pidgeon (and a massive advertisement on our end) The first one to exist is in Central City by Arisa Street and Chesterfield Avenue, costing a whopping $160 and can only be built in Senator cities and larger, and only allowing 1 per city.

Click here for an image gallery of all Purple Pidgeon locations!