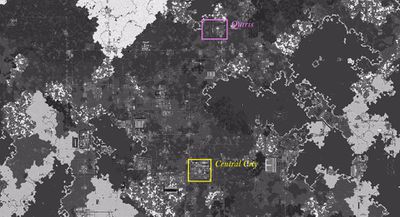 Quiris(Zn15&Zn16) is located along the Zephyr line.

Shared Municipal Policy (SMP): Quiris(Zn15&Zn16) is proud to be part of the Ionian Conurbation SMP, along with Woodsdale(Zn10), Heights City(Zn14) and BirchView(Zn13/C1).

Town established by User:HeavenAngel since 23rd May 2015.

To be added soon:

The housing in Quiris is mainly affordable apartments for most of the population. There are also condominiums, some landed housing and various hotels around the city. The main housing district is north of the townhall.

Majority of the public facilities lies on the now, outskirts, of the city as the central area is a business hub.

Accessibility to goods and services:

- Inside of the upcoming School (Only education related advertisements allowed)

- On the streets in permitted areas (Contact User:HeavenAngel by MRT mail, to know more about these places)

- On permitted skyscrapers (Contact User:HeavenAngel by MRT mail, to know more about these places)

- The northern area of Quiris is still being expanded on, things to be built; housing, factories, shops and facilities

- Some of you might have seen the runway in the north. Please take note that it is NOT going to be for commercial purposes, there are currently no plans for Quiris to have an airport.

- Something exciting in the north (where the runway is ;)~, its not an airport/airfield!)

- There are plans to furnish Quiris 100%, this may take awhile and will be done over a long time.

- Farms to sustain Quiris' growing population will be set up in the north as part of a self sustainability program.