Redstone Valley is a town on the MRT Server, originally created by minecrafter0505. Redstone Valley is located north from  Y14  Oaksville-Owasso next to I-100 (originally called I-101 or Northern Highway), and its current mayor is minecrafter0505. The name "Redstone Valley" is a parody of "Silicon Valley" and to stick to that theme, the town is has an industrial purpose. When the town was founded, it was first planned to expand towards the south, but the handbuilt town of Owasso blocked this expansion. The second goal was to expand westwards, but also that region got claimed by another town (Cytus). Now there only was the expansion way towards the east through a jungle and this is the way Redstone Valley is expanding today.

The Old industrial District is the oldest and smallest of all districts in Redstone Valley. It only contains two buildings but they were the foundings of Redstone Valley: The garden Centre "The Plant" and the first RedLogic. In the beginning, the entry street to Redstone Valley from the Northern Highway was a staircase infront of the garden centre. It got removed and replaced by a former exit when the Northern Highway (I-101 from that time, today known as I-100) got renovated. The district is now connected to the Fountain District via the Tower Street and a walkway. To be exact, this district has a third building which is not well known or even a secret: The Redstone Vally Lava-Powerplant is located right next to the RedLogic. It is hidden in a deep cave and can only be accessed through one staircase.

The Fountain District or Old Central District is the old centre of the city. Its main part is a plaza with a fountain, which gave the district its new name. The Community Centre located at this plaza is the old Town Hall and it still has the city's archive inside. The SkyStar Tower, originally designed to be the town's landmark, is also located in this district. It was home to several, temporary offices and has an observation platform. Since its rebuild at the beginning of 2014, it got a fireworks display built into the roof.

This district holds several industrial builds but is still one of the smaller districts. It is home to the RedMind HQ (RedMind Tower) which is built in a WTC-style to be a memorial for 9/11. Due to its height, it was used as the city's landmark and replaced the SkyStar Tower in that role. In this District, the ideas and products of RedWays and Enderware are planned and constructed.

West of the Industrial District, the Shopping District is the home for many shops and stores or even restaurants. In addition to that, it is home to the Redstone Valley TransHUB. To ensure full mobility, there is also a tunnel towards Cytus passing below I-100. 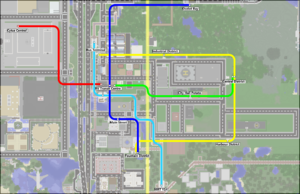 Map of Redstone Valley Metro and SkyRail System (by JD-Mapping)

Redstone Valley can be reached with multiple rail and bus connections. All traffic is handled via the Redstone Valley TransHUB and all transit connections are listed on the assigned wikipage. To make travel inside Redstone Valley easier, the Redstone Valley Metro (RVM) lines service within the city. At the moment, there are two lines opened to service (from RV TransHUB) Southbound and Eastbound Destinations. Also a Northbound service towards Ocelot Bay is avialable with  RVM1 . To get from the Transit HUB to  Y14  Oaksville-Owasso, an express line called SkyRail was built.

Redstone Valley still has much space for people building their stores and "corporation-outposts". Free offices are also avialable in the Skystar Tower. At the moment, Redstone Valley contains this stores and attractions: