From Minecart Rapid Transit Wiki
Republic of Bahia redirects here. Please go back to the page that linked you here and correct the link.
Jump to navigation Jump to search

Bahia (pronounced: /bəˈhiːə/, /bɒˈiːə/), officially the Sultanate of Bahia, is a country located in the Southeastern MRT. It is bordered by Cremona in the north, Dana Point in the west, Mojangsburg to the east and the world border to the south. The remainder of the border is formed by Lake Thanos to the east and Wagtail Lake in the north. Bahia occupies a total area of 3.2 km2.

Bahia is a multi-ethnic nation with a population of 23,620,011 inhabitants. English, Spanish, Malay, and Arabic are the country's four official languages. About 74% of residents are nonreligious, with 13% adhering to Christianity, 11% adhering to Islam, and 2% believing in other assorted religions.

Bahia is officially known as the Sultanate of Bahia. The name of the country is derived from Lake Thanos, described as a bay by early geographers. The word "Bahia" is Spanish for "bay." Until 1722, the land to the north of Lake Thanos was called "Ooblek". Under Renoldian administration, from 1722 to 1891 the area was known as Spanish Bahia (Bahía española).

In antiquity, the territory of Bahia was occupied by the Batam Empire, which was ruled from thriving Batam City, one of the largest cities in the south. The empire at its largest extent stretched from Murrville to Mojangsburg, but soon fell into decline. The remains of the empire separated into warring tribes, which continued into the 18th century. In 1722, explorers from San Renoldi set foot in Walvis Bay, and established a fort that would stay in commision for hundreds of years. In 1865, english settlers from Kenthurst established the city of Singlwurst on Singlwurst Island in Lake Thanos. Soon, settlers from Singlwurst were dealing with overpopulation, and many moved to the nearby mainland, founding the city of Sunshine Coast. Sunshine Coast grew quickly into an important trading hub, and quickly outpaced Singlwurst as the region's largest city. In 1891, Sunshine Coast and Singlwurst united to form the Bahian Empire, which quickly took over much of the region, including the northern desert near Walvis Bay. In 1944, the Bahian Empire was invaded by the Mojang Union, and promptly collapsed. The Republic of Bahia took the empire's position, and under President citybuilder_'s reign the nation industrialized and was mostly taken out of poverty. In 1964, President citybuilder_ was ousted in a coup lead by General Gran_Cacto, who was quickly overthrown by General Cact0 in the 14 month long Bahia Civil War which racked the country. General Cact0 modernized the country, and brought it from the brink of collapse to one of the MRT's most powerful nations. Sunshine Coast expanded to become one of the MRT's largest cities and the largest city in the entire Epsilon region. In march 2019, President Echohue was picked to replace Cact0 as President of the Union, and his reign has been criticized for its crackdowns on liberties and free speech.

Bahia is a federal parliamentary absolute monarchy, with executive power resting in the Sultan, which is by turn dominant over the cabinet, and legislative power in both the government and the National Assembly. 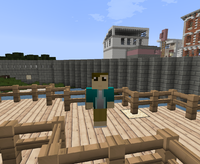 The Sultan, currently Echohue, is the prominent figure in Bahian politics; the head of state and commander-in-chief. The Sultan exercises their executive power assisted by their appointee, the Deputy Prime Minister, currently sesese9. The Supreme Secretariat (cabinet) is responsible to and presided over by the Sultan. The judicial system consists of courts of first instance, a High Court of Appeal, and a Supreme Court. The Chamber of Deputies is the country's legislature, consisting of 35 members elected every four years. Although unicameral, the Constitution provides for the creation of a Senate. The last election was held on 22 February 2019. Bahia has a dominant-party system, with the People's Party (PPB) controlling the legislature and the executive systems since its foundation in 1979. Opposition parties are allowed under the constitution, but have been cracked down upon in recent years.

Foreign relations of Bahia are managed by the Bahia Department of Foreign Affairs. Relations with most countries are amiable, and the republic is a founding member of Montego and the Zeta Republic.

The Bahian Armed Forces include the Bahian National Army, which consists of the Navy, the Air Force, and the Bahia Ground Forces. Bahia spent over $113 billion annually on its military as of 2019.

Bahia is partitioned into thirteen administrative provinces, with the city of Sunshine Coast being independent from any province.

Bahia is situated in Southern Epsilon between Lake Thanos and Wagtail Lake. It lies between latitudes 0° and 16°N and longitudes 154° and 162°E.

The nation's coastline stretches over a kilometer, with terrain consisting mainly of plateau, plains and highlands. The central and southern area of the country is marked by high plateaus and deep valleys, whereas the northern part of the country is mostly flat with a few high massifs.

Bahia's highest mountain is Cerro Tronador, on the Alta Mesa plateau. There are multiple large, flat plateaus which protrude from the southern plains, with the highest being Alta Mesa.

Most of Bahia is a tropical savannah, with the northern 1/4th composed of the Danakil Desert. 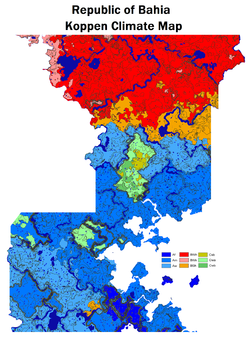