Riverend is a large City on the MRT Server, created by and maintained by cal76. Located in the north east, and connected to the mainland through a road bridge to  B2  North Edge the town has been slowly expanding over time. 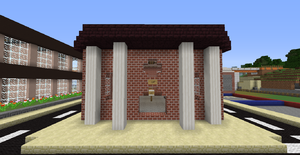 Riverend is run by a Mayor. The first and current Mayor of Riverend is cal76. The Mayor makes all the important decisions, and does most of the construction. Helping the Mayor is the group of four Councillors. They are second in command, who meet and discuss with the Mayor in the towns city hall. Currently, the only Councillor is thomasfyfe. Below the Councillors are the Ministers, who debate endlessly in Riverends Parliment building, even though they hold no power whatsoever. Elections have been banned since the Velociraptor crisis. 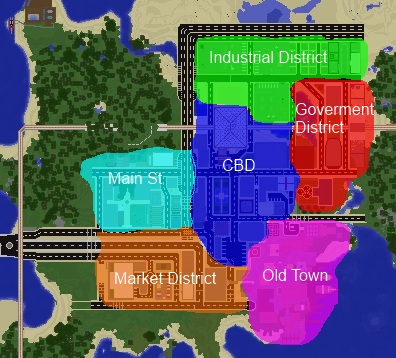 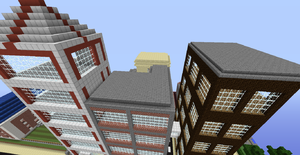 The CBD houses the main transit hubs (the Orange Station and the Riverend train station) as well as the Grand Park and the towns tallest buildings. 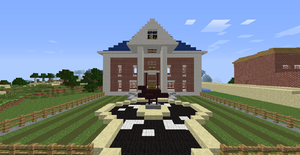 The Goverment district has the City hall and the mayors mansion, alongside the courthouse and Parliment building. One more building is used to house individual offices for ministers. A row of houses is planned for each of the four Councillors.

The first area of the town constructed, the old town still retains its old gravel roads. This part of town has seen a lack of development in recent months and will likely stay in its state of stagnation. The old town hall (now a museum) is located here.

Close to the city bypass main street has pleanty of shops and some buisnesses and residential zones. Next to it, is the Galactic Studios, used to shoot popular movies. 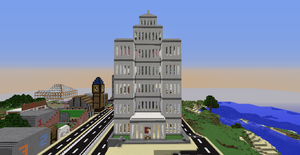 Here is the headquarters for Cal Tower. Alongside it, is a few small shops and a marketplace.

Contains factories for blue collar workers, including a brewery and the main factory for Dave's Doughnuts. Nearby are a few streets of small, cottage like housing, so the workers can quickly get home after a day of work.

Riverend is serviced with top quality roads as well as the MRT Orange Line. A planned metro system was cancelled due to problems with the system. However, the brand new train station may be used to service lines to other towns. One major part of transport is the city bypass. With some areas having over three lanes and future expansion planning on having four or more, it truely keeps the traffic flowing. 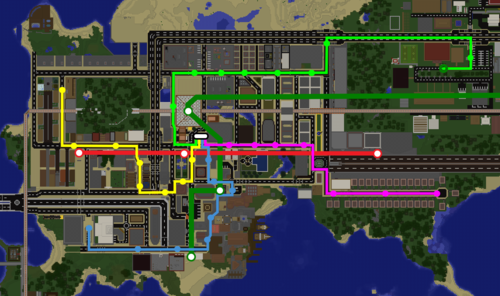 On the 15th of January 2014, cal76 made a deal with autobus to incorporate a brand new tram network to help service Riverend. The result was four lines, which service most of the city, as well as the nearby town of Farrgut. The system was build in quick time and opened on January 17th 2014.

On the 17th of Marth 2014 cal76 gave autobus permission for his ATTS international Metro A ending in riverend. This service will serve the south of riverend and goes to the NorthEast waterport, palmville, autotown and Nopado city. In riverend are 3 stations situated. Riverend (at o5), The old barnsley station is recovered and gone into service again as "riverend Barnsley" and at the south the new stop riverend south has been released. For more info about the line, Visit the ATTS page. Also tram stop: nightclub on cyan line has been renamed to station South.