San Dzobiak International Airport (SDZ) is an airport that serves San Dzobiak. It is also close to the cities of Siletz, Dabecco, Royalston, and Matheson.

The airport is accessible by a tiered service ring road for Pickup/Drop-off from Platypus Valley Parkway, as well as a San Dzobiak Monorail Station, Airport Station. The airport has three concourses as part of one central terminal. There are 17 gates, 15 of which are operated by FliHigh Airlines as part of its hub.

The airport was designed to be expanded from a Senator airfield into Governor and beyond, and is intended to serve San Dzobiak as its permanent home of air transportation. Construction will be done in phases to grow in tandem with the city itself, starting with Phase 1 as a 6-gate Senator airfield. Phase 2, a project finishing the main terminal and adding 11 gates, opened on February 13, 2021.

The airport won the designation of Best Airfield in the 2020 MRT Transit Awards. 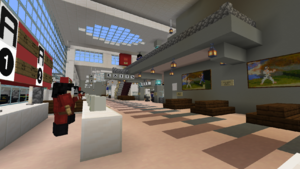 The interior of Concourse A in June 2020.

The airport is planned to be constructed in phases, the first phase of which will be built under the MRT's Senator Airfield regulations. Phases 3 and beyond will expand the airport north and east of the site when expansion needs warrant. 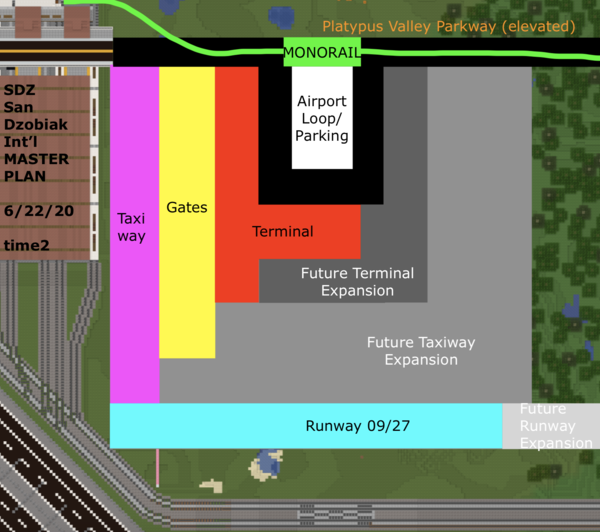 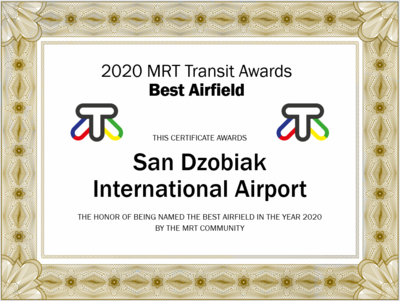