Siletz Salvador Station is a passenger rail terminal located in western Siletz. Built on an elevated structure, the terminal contains 20 tracks stacked across three levels, as well as 2 underground tracks. The station, originally partially constructed in the summer of 2017 by IntraRail and mostly unused, was entirely rebuilt in January 2019, and is built, owned, and operated by IntraRail.

The station is directly adjacent to Siletz-Umatilla Regional Airfield.

The original Siletz Salvador Station began construction in the summer of 2017, intended for use as IntraRail's hub in the Siletz area. The station was built on an elevated structure of brick and cobblestone, with a single elevated level containing 14 tracks. IntraRail planned extensions of service from Segville and Matheson to service the new station, and the station was to act as a gateway for future expansion towards the Achowalogen Takachsin-Covina area. The first line to be built from the station was a line to Lochminehead stopping in Dabecco, to be built and operated by IntraRail under contract to the United Cities Transit Committee, and the line was expected to be the first segment of IntraRail's expansion towards Achowalogen Takachsin-Covina International Airport.

However, IntraRail soon entered a period of hiatus, and construction on the line and the station stalled. The United Cities Transit Committee, at IntraRail's request, reassigned the line to Bay Area Rapid Transit, more commonly known as BART, and later reassigned the line again to Fred Rail, which completed construction to Lochminehead and began running trains on its Lochminehead Limited service, leasing two tracks at Salvador Station from IntraRail. 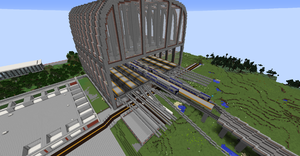 As IntraRail effectively abandoned its expansion plans into Siletz, the station never completed construction, and was missing station signage, passageways from street level to the platforms, and terminal furnishings. The partially built station, sitting in a general state of disrepair, included a completely empty mezzanine at street level, with no stairways built to allow access to the platforms. The platforms themselves were entirely empty, and of the 14 tracks in the station, only the center two saw passenger service through Fred Rail's Lochminehead Limited. As Fred Rail's trains used on the Lochminehead Limited service were oversize, the company haphazardly extended its platform and tracks to hang off the edge of the station on the north side. At this point, the station served as an abandoned, forgotten relic to IntraRail's never achieved expansions plans of 2017, with only a single isolated rail service operated by a third-party company under contract to the United Cities.

In November 2018, the United Cities officially dissolved, and with the dissolution came the transfer of its assets into private ownership. The line from Siletz to Dabecco, operated under contract to the United Cities by Fred Rail, was transferred to the full ownership of Fred Rail. However, the station along the line in Lochminehead, which was originally built by IntraRail when it had been contracted to build and operate the line, was transferred to the private ownership of IntraRail, while Salvador Station had been fully owned by IntraRail since its construction. 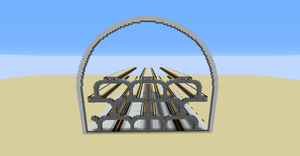 The new station while under construction, after the base design was finalized.

In late 2018 into early 2019, IntraRail began planning to pick up on expanding for the first time in a while. The first publicly announced expansion of the new year was a corridor to extend IntraRail's service between Horizon National Airport and Waterville, in order to serve new cities including Snowtopic and Larkspur. While waiting for staff approval to build certain segments of that corridor, IntraRail focused on other possible areas of new development, and soon returned its focus onto the Siletz area, once slated to be a major point in IntraRail's network. The company evaluated the state of Siletz Salvador Station and the possibility of rehabilitation, and determined that the only sufficient course of action was to completely rebuild the entire station from the ground up.

Construction of most of the new station took place off server, and was not publicly announced. As different designs were tried, the final design IntraRail settled on was a stacked elevated terminal, with a large curved roof, and three levels of tracks stacked offset from one another. The new terminal was constructed out of white concrete and large, white stained glass windows, with the aim of giving the station a grand, modern design, a radical departure from the brick and cobblestone design of the old station. As the base terminal design was completed, a schematic of the track layout was used to begin laying out the track interchanges adjacent to the station, before the station itself was pasted in. IntraRail decided it did not want a great deal of public attention on its new station until it was close to a state of completion, and as such, even while members were able to visit the conspicuously placed new station after it was pasted, and several retail stores were invited to open locations in the mezzanine level, IntraRail made no official public announcement of the station's existence. The publication of this wiki page is the first official public announcement of the new station by IntraRail.

Siletz Salvador Station is one of IntraRail's larger stations, with 22 tracks, putting it at around the same track number as Ravenna Union Station, another IntraRail-built station. Most of the terminal is elevated, containing 20 tracks split across three elevated levels above a ground level mezzanine. The station fully fits within the size of the old Salvador Station, in terms of length, width, and height. 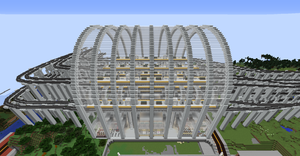 The defining feature of the station's design is the nine white concrete arches forming the station's exterior, connected together by large, expansive white stained glass windows. Inside the station, concrete arches form the support structure on which the elevated platforms are suspended. The three platform levels are offset, such that concrete pillars stemming from a platform on one level arch over towards another platform on the same level, and a platform for the above level is suspended in the middle on top of the arch. Through this design, the upper and lower platform levels are located on top of one another, while the middle platform level is offset such that its platforms are between the platforms of the upper and lower levels. The elevator layout reflects this design, with six elevators connecting the ground mezzanine level to both the upper and lower platform levels, and eight elevators connecting the ground mezzanine level to the middle platform level, allowing elevators to travel in the spaces between platforms at floors where they do not stop.

Each platform is fitted with signs identifying the name of the city and station, benches for passenger seating, as well as signs by the elevators identifying the track number, rail company, and destination for each track. Information signs for each track are also present on the exterior of the elevators in the mezzanine level as well as a central track listing board in the mezzanine level. The mezzanine is located at ground level, and includes the street level entrance to the terminal, track listings, elevators to the platforms, and retail spaces.

As the station consists of a large number of elevated tracks, on either side of the station are two large track viaducts to provide trains access to the terminal. Each viaduct is supported by a large number of concrete pillars, which individually support each track. The south viaduct turns to the west immediately south of the station to avoid pre-existing development, continuing all the way west of Siletz to near where the A4 turns north. Throughout the length of the viaduct, the 20 tracks from the three track levels converge into a single level of six tracks, two unidirectional tracks for each track level of the station. There is a track interchange to allow for trains to cross between the different pairs of tracks, before each pair splits off to a north, west, and south stub, the point where lines to Siletz are expected to connect.

An additional underground level at the station includes two tracks for use by Fred Rail's existing Lochminehead Limited service, whose trains do not meet the size limits for the elevated tracks at the station. The two tracks will connect directly to Fred Rail's existing line into Dabecco and Lochminehead. All other train services are expected to use the main elevated terminal, and must fit within its size limits.

Tracks 1-20 are the main elevated tracks, split across a lower, middle, and upper level. Tracks 21-22 are underground tracks, exclusively for use by Fred Rail.

Siletz Salvador Station is directly adjacent to Siletz-Umatilla Regional Airfield. Additionally, the construction of a small bus terminal across the street from the station is under consideration

Request to serve Siletz Salvador Station using the table below. You will be contacted privately by IntraRail to discuss your request.