Svobodny is an ex-soviet styled town constructed by RLcrafters in the very NW corner of the Epsilon map region in the New World. Noticeable features about the town are its distinct Khruschyovkas (Хрущёвка) introduced by the USSR as a cheap housing alternative, and the general run down feel of a heavily industrialised city, lots of areas overgrown and neglected.

Meteor Island (The English translation) is so called because of the almost perfectly spherical hole in the southern tip of the island, of which a small park and riverside walks have been built around it, the name was also coined due to the numerous natural caves and water spring craters dotted around the island before almost all of them were paved over. Meteor Island is a primarily heavy industrial district, with several small and large businesses setting up on the island, it also has it's own spur off the RZD (РЖД) mainline running parallel. 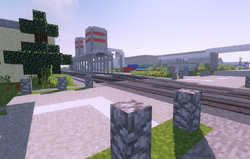 The Southern Residential district (or Residential 1) was the first district to be constructed and expanded upon in the city, it is home to most of Svobodny's residents at the time of writing, also within the district you will find the current City Hall (Ратуша) though, this is due to be moved into a much larger building in the central district at a later date. 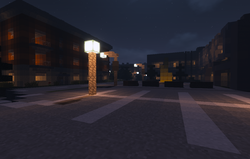 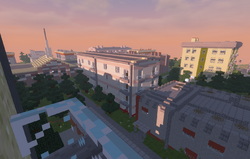 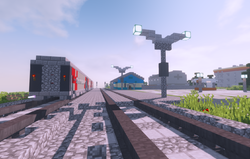 The Central district is still to be developed, but it is planned to have lots of office and commercial space as well the new City Hal complex.

Svobodny's metro is based heavily on the metro networks of both St. Petersburg and Moscow, of which both are notorious for having incredibly grand stations with ornate designs carved into the walls, stunning artwork on the walls and ceiling and chandeliers at most stations. The metro stations on Svobodny's metro have been modeled on these aspect, to the best of the builders ability. Below are some screenshots of some stations on the Svobodny metro. 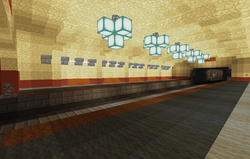