Teivaki is an island in the Northern Ocean that is a part of the town of Itokani. Owned by MinecraftYoshi26, the island is the seventh settlement for Itokani. The island began construction on September 18, 2020, and was completed on September 21, 2020.

Teivaki is the agricultural center of Itokani and is known for its abundance of beetroots and apples. 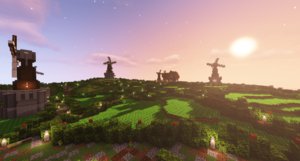 The Altéa Farmhouse and four windmills

Following the completion of Waitui and the submission of the plan for Vakasuka International Airport, Teivaki was officially claimed on September 18, 2020. MinecraftYoshi26 had the idea of building a farm island for the town and eventually came with the idea of having the island similar to that of one on the server of Amberstone after the crop fields were visited on The Amazing Race 9. 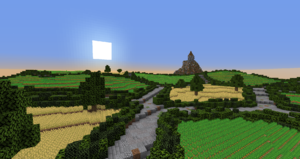 The farms on Amberstone that the island was based on

The Altéa Farmhouse is named after a town on the server Amberstone, referencing the town which had the farms that Teivaki is based on.

Teivaki is located in the Northern Ocean. It is the southwestern island group in the region of Senikau and is Itokani's first island claim in the group. The island is surrounded by deep ocean and deep lukewarm ocean biomes.

Teivaki has a total of 10 buildings: eight windmills, the Damudamu Lighthouse, and the Altéa Farmhouse.

The island has winding stone, dirt, podzol, and grass paths that link up the windmills and buildings with large fields of beetroot plants. The walls of the paths grow apples, the island's other staple crop.

The exits from the island will be connected through bridges to the three neighboring islands. This island is the second island in Itokani with no Itokani Local Transit boats.