The Mole 2: The Double Agent Strikes Once Again

The Mole 2: The Double Agent Strikes Once Again, known colloquially as The Mole 2, is the second season of The Mole. 12 players, one of whom was the Mole, competed over nine episodes. The season's episodes were held on March 30, 2014 and April 5, 2014. The maximum possible pot was 70,000 diamonds, and the quizzes were nine questions. Various other minor format elements were changed for the second season, such as double eliminations. Episodes were now named after quotes from players during that episode. 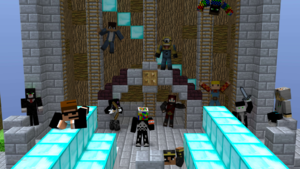 Teamwork Starter: The teams were introduced to the city owned by the last mole, Music3_0. The team members had 7 minutes to work together to find their way to the top of the church. An explosion was heard. It opened a hole in a building. The correct solution was to climb into the house of the explosion, make your way out, climb across roofs, then climb the tower to the top. gogojakeo reached it first, and gave the team 300 diamonds.

Coastline Crusade: The players were taken to a beach. The goal of this mission was to find eight items that had a specific requirement on it. They had ten minutes to find them. Some chests were empty while some were held with a block. They had to find the blocks out of 100 chests on the shore.

Benie, who was voted the "whiniest" player, could not have done anything. At the end of the challenge, they were told Benie had earned an exemption. The requirements were about specific blocks, for example, What block was placed first in Inchmuir? All of the requirements are told in the picture in the photo section for Episode 1. For each correct item found, 100 diamonds were added to the pot. 2 correct guesses were made and gave the team 200 diamonds.

Lost In The Caves: In this challenge, The players had to search through the caves of Valgirn and find five chests each with 400 diamonds in them. They were given 10 minutes. The hints they were given were: Top of Testificate, the farm silo, Store 45, Fellen the Strong, and Alter of the Sever. They found all of them, however, at the Alter of the Sever, there was either an exemption or 400 diamonds. Music3_0 found that chest, he chose the exemption, which made the team lose 400 diamonds. The team ended up winning 1,600 diamonds.

Storm The Castle: The remaining players were teleported to Inchmuir and on front of Fyfe Manor. They had to find an exemption in the mansion. To get to the exemption, a player had to jump out of a window onto a ledge and find the chest in the corner of the castle, which was inaccessible if a player didn't jump. Computerghost found it and didn't accept the money offer.

Siege The Castle: The players are taken to an abandoned fort and told they must defend it from three aggressors. The targets are eight fires, each worth 500 diamonds. The aggressor's objective is to destroy or put out the fires. To succeed, the players must keep the fires safe for ten minutes. They had five minutes to prepare. Success in this task is worth 4,000 diamonds. The aggressors had iron and gold armor with stone swords while the team had leather armor but with iron swords. The players kept all fires lit for the ten minutes, resulting in them getting 4,000 diamonds.

Hostage Rescue: In this challenge, the group had to find kidnapped computerghost somewhere hidden in the map. They had could talk to computerghost the whole time, all he could see is out a couple windows. He stated he saw snow, some type of wool line, and a reenactment of a Star Wars Battle. The group had ten minutes to find him. They had to find Primrose by the hints given by computerghost and his descriptions. The correct location was that he was in a statue from Lord Of The Rings near Primrose. All of them had to arrive to the place before time was up. They sucessfully all arrived there and the team earned 3,000 diamonds.

Studio 8: The remaining players had to search through many sheep inside Studio 8 (little did they know that hidden there was the final elimination room). The had to find the sheep renamed "Exemption" to receive the exemption. The longer the team took to search for the sheep, the more sheep were added. The sheep they were looking for was a small, baby white sheep. Soleurs found the sheep and he was offered 1,000 diamonds, he did not take it, making the team lose 1,000 diamonds.

Exemption Run: Players had to run across a football field and grab a wool and place it on the diamond block. However, the twist was that there were anvils falling and they had to run across and run back without dying. If they died, they would have had to run across again. colaja953 completed the task first and was awarded with the exemption. No money was offered.

Red vs Blue: This challenge was basic capture the flag. The six remaining players had to split into two teams, red and blue. On the blue team, 6687kittycat, hawksfan1010, Soleurs. On the red team, colaja953, Benie, KittyCat11231. The other team's goal is to break the other team's flag inside the courtyard. The team that won was the blue team. Now, acting separately, MinecraftYoshi26 asked if they would like to exchange any of the exemptions for 500 each. They all said no. 1,500 diamonds were lost.

Dumb vs Smart: The six players had to choose from either being on the "Dumb" team, while three others were deemed the "Smart" team. The "Dumb" group were presented with a series of eight different brain-teaser questions, and needed to select five to present to the "Smart" group. The "Smart" group then had 10 minutes to solve the five problems for 1,000 apiece. If the team guessed a problem incorrectly, they were given one minute to come up with a second guess. If the "Smart" team was unable to solve all five problems, all three "Dumb" players earned an exemption; if the "Smart" players got all of them correct, however, they would earn the exemptions. The "Dumb" team chose problems 1, 2, 3, 5, 8. The "Smart" group solved 5 & 8. The team ended up with no one getting any more exemptions, but ending with 2,000 diamonds.

Episode 7 - "I Thought I Would Have Been Eliminated" -colaja953

Diamond Mania: The players had to look around North Inchmuir to find a total of 100 diamonds, each valued at 100 diamonds each, resulting in a total of 10,000 diamonds possibly earned. The team searched the city for the diamonds in the 10 minute time frame they had. They had to look for them in trapped chests. In the final count, the team found forty-three out of a total one hundred possible. The team earned 4,300 out of 10,000 total. They made a decent profit.

Anagram Mania: In this challenge the team was teleported into a room and they all saw a bunch of letters. Each letter was made out of a different block. Some blocks were: Light Blue Stained Clay, Blue Wool, etc. What the team had to do was that they had to take all letters with that were made with the same block and once they have done getting all the letters together, they must rearrange all the letters for form a word, once having the correct words, then they must rearrange the words into a phrase and message it to MinecraftYoshi26, the host. If correct, they would be offered an exemption. The correct phrase was: "ONLY THE WISEST WILL WIN AN EXEMPTION.". KittyCat11231 got the phrase first and was offered an exemption or 2,500 diamonds. He declined. He was then offered 5,000 diamonds. He accepted that offer, and gained the team 5,000 diamonds.

Episode 8 - "Thanks For The Great Time" -Soleurs

The Four-Thousand Diamond Game Show Drop: In this challenge, the four remaining players split into two groups of two. Soleurs and colaja953 on one team, and KittyCat11231 and 6687kittycat on the other. Each team had 2,000 diamonds to start with and they had to answer four questions to win. Each question had a four answers, one being correct, three being wrong. They had to bet their money and if it was wrong, their money would fall into the void. They were allowed to split their money on all the drops but one, meaning, they had to leave at least one drop empty.

The Four-Thousand Diamond Air Drop: The players chose one person to run through a machine and catch diamonds falling from the sky before they hit the ground. Soleurs was chosen as the runner. The game was simple. The team sadly only earned 65 out of a possible 4,000.

The Long & Winding Roads: The three remaining players are asked personal and revealing questions about each other. One by one, a diamond is hidden in a chest in hidden in the area. The two other players are asked the same questions, and must try to match the answers given by the hidden player. After each response, the two players go either left or right in a fork in the road. If they answer all three questions correctly, they will successfully guide themselves through the village and find the hidden diamonds. If they make just one wrong answer, they will go down the wrong fork in the road and will not find the diamonds. This took place at Arisa. The team succeeded at one person's questions, but failed the other two. This ended with them ending with 4,000 diamonds out of 12,000 possible.

The Dossier Race: All players were separated and had to race around the server to find three clues for each of them. They chose between 1, 2, and 3. They all started at the Mole Manor and ended at Arisa. colaja953 arrived at Arisa first and was offered 10,000 diamonds instead of the dossier. He took the Dossier, containing an answer to a question on the quiz, making the team gain 0 out of a possible 10,000.

Episode 1: During the first challenge, KittyCat11231 did nothing and tried to slow them down. In the crusade, KittyCat11231 had blocks and cleared his inventory when he found any.

Episode 2: KittyCat11231 tried to not find any chests and hid maps and threw items into the ocean.

Episode 3: KittyCat11231 poorly defended the castle in Siege the Castle.

Episode 4: KittyCat11231 failed to attract players to a false location in Hostage Rescue, trying to lead them to other snowy areas such as Kalmar. In Studio 8, KittyCat11231 searched desperately for the exemption to make the team lose money, however, he did not find it, but the team still did lose money due to Soleurs's decision.

Episode 6: KittyCat11231 tried to give hard questions to the smart team to make them lose money in Dumb vs Smart.

Episode 7: KittyCat11231 purposely did not "find any diamonds" in Diamond Mania. The Mole only just looked in chests and only deposited a few to look not suspicious.