The Mole 6: Blast From The Past

The Mole 6: Blast From The Past, known colloquially as The Mole 6, is the sixth season of The Mole. Eight players, one of whom was the Mole, competed over five episodes for a possible pot of $5,000. The season was held on July 13, 2015, the third anniversary of the server. The quizzes were all six questions. This was the first "mini-season" where the whole game show was done in one day. Additionally, it was first season where there has been a repeat mole and was held on the spot. 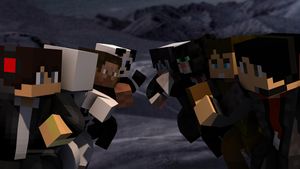 Episode 1 - "I Won't Remember Anything" -Baseball02a

Fight For Your Life: Originally from Season 3, the remaining players were put into a Wishington-PVP arena, /pa 7, Nether Fortress 2, and had to fight to the death for an exemption. KittyCat11231 won the PVP Match and was offered $100, declined, then was offered $200, declined, and was finally offered $300 and declined.

Searching For Answers: Originally from Season 5, the group was taken to an abandoned town. In this challenge, there were many chests hidden around the city with different items, most useless. They had 10 minutes to find the correct blocks and place them in the right place. Each correct answer was worth $100. The things they had to figure out were (and their respective correct answers):

One In The Quiver: Originally from Season 5, One In The Quiver, is a gamemode on the server Mineplex. To play One In The Quiver, you must first choose your class. Once that has been done, the game will eventually start. When it does start, you will be given a couple seconds to run around and find people to kill. When the timer ends, you use your bow to shoot people. If you shoot a player and kill them, you will receive another arrow. If you shoot a player and miss, your arrow will be gone. You will have to use you axe/sword to kill another player for another arrow. If you kill one person and then another without dying, you will receive two arrows. The first player to get 20 kills is the winner. If a mole player wins, that person is given an exemption. If a stranger wins, $400 is added to the pot. The winner was a random player, and $400 was added to the pot.

Farm Fiasco: Originally from Season 1, the group had to whip up a series of food items by gathering items throughout Valgirn's farm. They had to make 64 cookies (worth $200), 16 steak (worth $100), 10 cakes (worth $200), and 32 pumpkin pies (worth $100) under eight minutes. The team had to figure out that the eggs were in the farmhouse. There was a secret book in the wheat field, and if found, the player would gain an exemption and no money would be added to the pot. The team did not make any items for this challenge.

Farm Games: Originally from Season 3, the players were told to split into two groups, people who want to work, and people who want to play games. 3 were the team who wanted to play games, and 2 were the working team. The people who want to play must lead sheep from an animal pin and put them into the correctly colored checkerboard pattern marked about 30 blocks away from the pen. Differently, this season, all the sheep are lime, and there was dye hidden in the jungle inside a house, which must be used to dye the sheep. If completed that first, the group would earn $300. However, the workers had collect 2 double chests full (6192) bands of wheat and replace anything they broke, and if they would each earn an exemption, and no money is added to the pot. The play team finished first and $300 was added to the pot. There was also a secret book in the wheat fields that, if found, automatically gave that person an exemption and ended the challenge.

The Long & Winding Roads: As per usual, every season has this challenge. The three remaining players are asked personal and revealing questions about each other. One by one, a diamond is hidden in a chest in hidden in a village. The two other players are asked the same questions, and must try to match the answers given by the hidden player. After each response, the two players go either left or right in a fork in the road. If they answer all three questions correctly, they will successfully guide themselves through the village and find the hidden diamonds. If they make just one wrong answer, they will go down the wrong fork in the road and will not find the diamonds. Each correct path earned them $200. This took place at Arisa. The team got zero out of the three and gained $0.

Ticking Timebomb: The same puzzle from from Season 1, the remaining players had to solve a puzzle in twenty minutes or they would fail. The aspects of the puzzle were to solve four puzzles, leading to four codes, leading to one puzzle, leading to one code, leading to the answer to win. The answers to this puzzle can not be revealed so that if you would like to play it, ask Yoshi. The team ended up solving the puzzle and winning $500.

Episode 1: Soleurs purposely failed a jump in The Fall Of Your Life.

Episode 2: Soleurs had withheld blocks that could have been correct in Searching For Answers.

Episode 3: Soleurs purposely killed members on the MRT in One In The Quiver and had taken the exemption.

Episode 4: Soleurs hid the vital eggs in Farm Fiasco and tried to delay a bit in Farm Games.