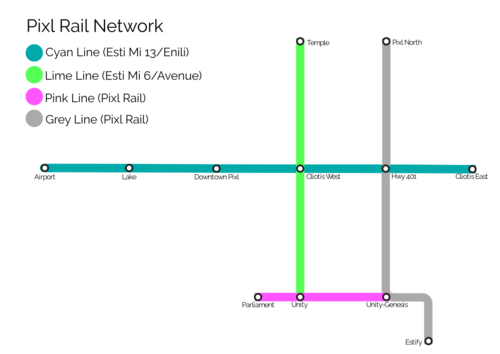 A map of Pixl's rail lines. (Map designed by CaptainObi)) 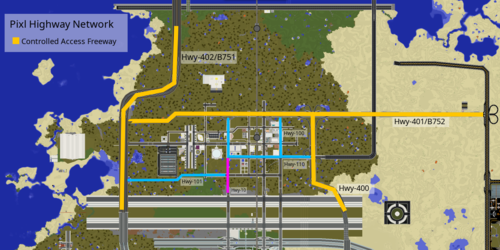 A map of Pixl's highway network. 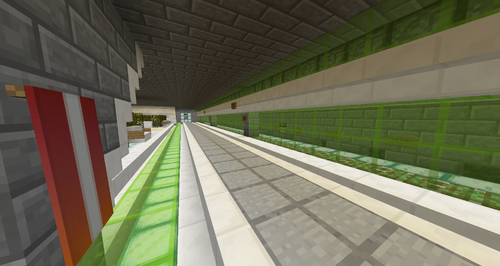 Transport Pixl (previously stylized as transportPixl) is the department within the government of Pixl which is responsible for developing regulations, policies and services of transportation in Pixl. Transport Pixl works in conjunction with the Pixl Border Services Agency, the Pixl Air Transport Security Authority, and the local police to ensure the safety of all passengers.

Pixl Rail was a hybrid rail network, combining standard minecart transport between stations, and warp rail between larger hub stations. Due to various internal factors, the majority of the project was shelved and all that remains is 2 smaller minecart lines, the Grey Line, and Pink Line (under construction).

Esti Mi is Pixl's subway network. The Esti Mi network was created by EstiNet, a joint transit provider for the Estify Region. Line 6 Avenue (Lime) was the first line to be completed in Pixl. This is to be followed by Line 13 Enili (Cyan), and Line 1 Genesis. Lines 1 and 6 are north/south lines that cross into Pixl from Espil, and as such only the section of the lines in Pixl are operated by Transport Pixl.

Transport Pixl maintains a few bus routes, mostly consisting of express shuttles. Some routes include a shuttle from MRT C83 Station to Downtown Pixl (Pixl Rd), and a shuttle from Pixl Vinayaka to Espil Ecilidae Airport.

Pixl is connected to the world by various third-party transport options. Pixl is serviced by RaiLinQ and BluRail.