Vermilion Metro is the biggest division within the VMTA. It operates Metro Roadworks for road construction projects, Metro Bus for local bus operations, Metro Rail for local rail service, and Meto Alternatives for the Topaz Cable Car and other odd forms of transport. 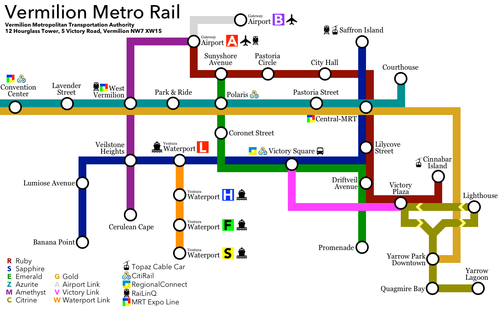 Vermilion Airways (VA) is a major airline based out of IVY Airport, managed by VMTA. VA flights depart and arrive into IVY using gates on Concourse D. Flight numbers are sequential in the order that the flight was added. Vermilion Airways is a founding and permanent board member of the SkyTransit Alliance.

Vermilion Airways is new world-exclusive. As such, VA will be requesting gates at all new world airports. 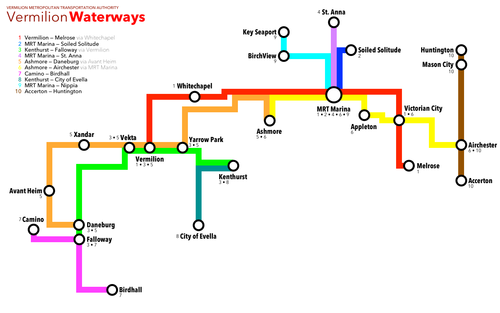 Founded in February 2015, Vermilion Waterways (VW, not to be confused with Volkswagen) is a commuter and passenger boat service, providing major connections between the MRT's water-linked cities. Rather than build a single hub like the airline, the Waterways use longer, numbered routes, with a trip between two stations being a numbered leg.

There are ten waterway routes serving over 20 cities. Three routes are in operation.

To get the trip number, the route number and leg number are added together. The first leg of the Vermilion—Melrose line (Route 1) is Leg 0 from Vermilion to Whitechapel, so that trip is coded VW 10.

VMTA owns and operates several facilities within Vermilion to facilitate transportation in and around the region.

Vermilion Gateway Airport (VER) is the main airport in Vermilion and is a hub for Vermilion Airways. It consists of 13 gates (A1-A7, B1-B6) and has lounges for both UnitedSkies and SkyTransit allied airlines. The airport is served by the Vermilion Metro  M  R  Amethyst and Ruby Lines, and the  A  Airport Link connects the two concourses. It will soon be served by Vermilion Metro Bus.

Concourse A is dedicated to Vermilion Airways and codeshare partners. Concourse B is for all other airlines.

The Vermilion Waterport allows ferry service around the New World to connect to the region. It is split into four terminals, each named after a famous person from Minnesota (the state Chief is from). The terminals are:

The first two terminals, Lindbergh and Humphrey, are named similarly to the terminals at the Minneapolis—Saint Paul International Airport (MSP), the busiest airport in Minnesota. However, unlike Terminal 1-Lindbergh at MSP, terminals are not split into concourses at JVV.

Terminals are color-coded for easier identification: Lindbergh is red, Humphrey is blue, Fitzgerald is green, and Schulz is yellow. The Lindbergh Terminal is closest to downtown, and the Humphrey Terminal allows cars to load as well as passengers. The four terminals are connected by the  W  Waterport Link.

Vermilion Waterways uses gates in all terminals, usually grouped together on the western end of each terminal building.

All boats to the old world must use the Schulz Terminal as it has international processing facilities.

Trivia: The code for the waterport is JVV, again named after a famous Minnesotan, in this case Jesse Ventura. An old plan for the waterport (when it had a security checkpoint, and was going to have two additional concourses beyond what is now the Lindbergh Terminal) included naming it after Ventura, and just using Concourses A, B and C. The terminals have since received their own names (L, H, F and S), and so the waterport reverted back to just "Vermilion Waterport", but the code remains the same. Kind of like how Toronto—Pearson has the IATA code YYZ, but that makes no sense, except JVV does (Jesse Ventura—Vermilion)