Villanueva (French: Villeneuve) is a [Mayor] town in a beach biome in Ward 6 of the New World. Capital of the Federated States of the New World, it is situated on northern banks of Heart Lake, one of the southernmost lakes in the Epsilon region. Villanueva has an island to the south, La Gota (Raindrop Island), which is connected by a monorail-only bridge. The Culebra River splits Villanueva horizontally, while the Sabana River borders the city on the north.

Villanueva was founded on the 1st of August, 2019, when ondist had received  SW26  Foobar in the distribution of the new Southern Line stations, on the look out for space to build a city on the coast. The oldest, and most finished district is Ocean Road/Waterfront, which is located at the coastline south of the MRT Station. Parallel to the creation of Southern Transport Operations (Soto), ondist started work on Villanueva Central railway station, which is the largest build in the developing city. 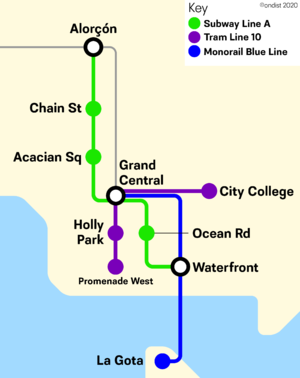