Vinataka is an island in the Northern Ocean that is a part of the town of Itokani. Owned by MinecraftYoshi26, the island was the third settlement for Itokani. The island began construction on May 4, 2020, and was completed on May 11, 2020.

Vinataka is notable for being the island of Itokani with a volcano. 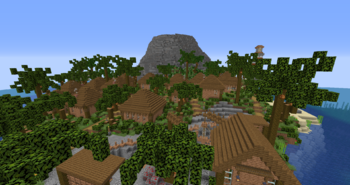 When planning the region, MinecraftYoshi26 wanted to make an island with a volcano, similar to the San Buenaventura Volcano on the Hummingbird Islands. After the completion of Manumanu, Vinataka was claimed on May 4, 2020.

After basic terraforming was complete, the first major non-natural construction on the island was the Vutuniyau Mines, which was made to emphasize the island's main economic export of mined materials. The Ririkotaki Village was built following the completion of the mine. The addition of the farms followed directly after. At the same time, the creation of the tourist shopping area in the northern portion of the island was built and the Moli Lighthouse was added.

Following the lighthouse, the Vinataka Public Docks were created near the tourist area with six shops. These shops and the houses were then furnished. 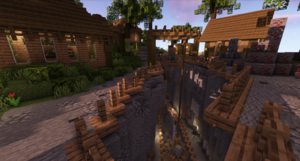 Vinataka is located in the Northern Ocean. It is the westernmost island in the region of Senikau. The waters surrounding the island are either a deep ocean or deep lukewarm ocean biome. 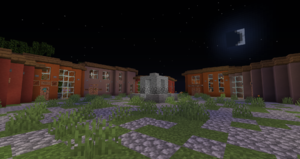 The shops and Tadra Well in northern Vinataka

Vinataka has a total of 22 buildings: thirteen village houses, the Ririkotaki Village Hall, the Vutuniyau Mine Foreman Office, the Moli Lighthouse, the Vinataka Island Gift Shop, a Gregg Fyfe's Fish & Chips, a Mossack's Gems, an AstroSlurp, an Aroma Coffee, and the New Bakersville Mail Company.

The island's main attraction is Mount Vakatiki, a large, bubbling volcano slightly taller than the lighthouse, the tallest building on the island. The volcano has various llamas with orange and light gray carpet on it.

The other major point on the island is the Vutuniyau Mine adjacent to the Ririkotaki. It is rich with minerals and materials, which are the island's major export.

The only exit from the island is through the Vinataka Public Dock in the northern portion of the island. The Itokani Local Transit boats take passengers to other islands in the city of Itokani. Vinataka is only connected to Waitui by boat.