Waitui is an island in the Northern Ocean that is a part of the town of Itokani. Owned by MinecraftYoshi26, the island was the fifth settlement for Itokani. The island began construction immediately after the completion of Koroturaga on August 1, 2020, and was completed on September 17, 2020.

Waitui is notable for being the nautical center of Itokani. 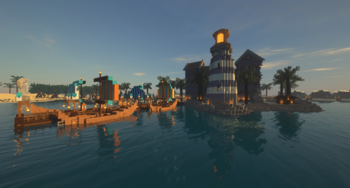 After the completion of Vinataka, the islands of Koroturaga and Waitui were claimed on May 13, 2020. A few days before claiming MinecraftYoshi26 was notified by Echohue that there were builds on the island that would become Waitui. After checking with Core Inspect, the builds were made by zb7. After sending a Discord message to zb7 explaining his plans, MinecraftYoshi26 was able to claim the island and the three buildings that were built on it.

After the completion of Koroturaga, major construction began on the island on August 1, 2020. Trees were deforested and the floor of the island was painted with andesite, stone, and cobblestone. Buildings were built out of light blue, cyan, and blue terracotta.

On August 3, 2020, the Hummingbird Boat Lines boat docks were created. The first connections out of Itokani went to Celina, Moramoa, and Verdantium on Line 44, the Pointsettia Line.

The building for the Hummingbird Boat Lines Southern Waitui Dock was created on August 20, 2020. This building marked the completion of the docks.

The two statutes, A Tribute To Degei and A Tribute To Turukawa, were named to be tributes for deities in Fijian lore. Degei is a serpent who judges the souls of the deceased and decides if they move onto the afterlife. Turukawa is a female hawk that hatched eggs with the first humans.

Waitui is located in the Northern Ocean. It is the southwestern island group in the region of Senikau. The island is surrounded by deep ocean and deep lukewarm ocean biomes.

In relation to other settlements, the closest other settlement at the time of completion was Vakasuka, which is connected by a bridge in the southern portion of the island.

Waitui has a total of 21 buildings. This does not count the open-air stalls nor bathroom facilities. The building style was to mix a tropical feel with the shape of buildings at Nyhavn in Copenhagen, Denmark.

There is also a public recreation area, Mason McCarthy Park, in the southern portion of the island. 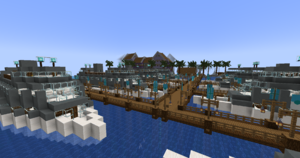 As the nautical hub of Itokani, the island is served by many boats. The Waitui Itokani Local Transit Dock on the north acts as one of the hubs for the local transit boats. The dock at the northern portion of the island currently serves Karakarawa, Manumanu, and Vinataka.

It also has a bridge to Koroturaga on the northeastern portion of the island.