The Willow Numbered Road System is a system of roads designated a number for their importance in the towns of Willow, Charlemagne and one in Savage City. There are currently 5 main roads and 2 auxiliary roads. These roads range from rural 2 lane roads to wide 6 lane expressways.

This road was the first road in Willow, starting from T48 in the Unrealistic District to the border in Twilight. It is an arterial road with only one interchange with W-2 and has no plans to incorporate interchanges along its route.

W-2 was a short freeway that serves Willowridge district. It will extend to A92 north of Borealia, but there is no access to Borealia. New border changes between Willow and Borealia significantly reduced W-2's exits and purpose. There is also a single sign that called it the "Northern Highway", and was forgotten. Since February 2019, Willowridge has been completely cut from Willow after border changes with Borealia. This cuts off W-2's importance as a vital connection northwards and to A92 and all buildings must be destroyed to keep Borealia's satisfaction. W-2 has now been decommissioned and only one exit will remain: the Avenue Rd Exit before entering a tunnel to bypass Borealia. The highway is currently under construction.

Ravine Parkway will be the main connection between a future A8 and Willow. It does not have a designation yet, because there are no plans to extend eastwards excessively. After the construction of the new WTS Oil Refinery, the road is quite congested to enter Willow because it is two laned and the only way into Willow is via Ice Plains Gt, only a primary street not quite capable of handling that much traffic.

Ravine Parkway becomes Ravine Highway, a super-4 expressway that serves the Industrial District. Immediately it curves southwards and has a partial interchange with Larkspur Heights St.

Avenue Road is a large arterial that acts as the border between Borealia, Willow and extends to Larkspur. Avenue Road is 2 lanes wide on the west side of B892, and enlarges to 4 blocks wide east of it. Avenue Road may receive a Number because of its importance as a bypass for Ice Plains Gate, which, from simulations, carries too much traffic from Ravine Parkway and Lakeside Drive. Avenue Rd is also the last stretch of B820 and ends at Willowridge St

The section within Charlemagne is named Charlemagne Highway although it is not one. It features only 3 intersections due to th hilly mega taiga biome. W-3 will have a customs gate at the Savage Drop Tunnel, but planning is undergoing.

W-4 is the first road to be completely inside of Charlemagne. Its speed limit is 110 km/h for it’s fairly straight path. It serves Starry District in Charlemagne and the Admod sub district. The highway can be twinned to become a freeway, but current interchanges would have to be rebuilt. Past W-5, the freeway gets two extra lanes and crosses the Frozen River. 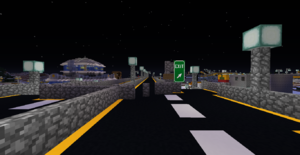 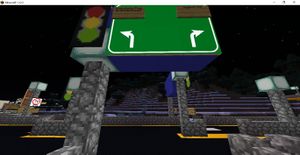 W-4A is the first auxiliary route inside of Charlemagne. It is the main road of Starry District and lots of traffic is directed onto it. It is a limited access road and currently ends at W-5, near the border of YellowSpork.

W-4B is the second auxiliary route inside Charlemagne. It spurs off of W-4A near YellowSpork and heads south. After only a couple blocks, it encounters the Texas Loop, meant to house the JM Main Campus. The two roadways travel together southwesterly and hit very compact and tight interchange with W-5. The W-4B designation carries onto W-5 and currently ends there. Since the W-4B is still mostly in planning, the roadway is barely maintained.