Sprinter services usually stop at every station along their route. They mostly use 4-car single-decker trains, which consist of one single unit. These services connect to smaller towns and may stop at multiple stations in some bigger cities.

Intercity trains connect larger cities together, skipping the smaller towns along the route. They mostly run on the same tracks as Sprinter services, but may use some shortcut tracks where this is sensible. 4-car and 6-car double-decker trains are used for these services.

Shuttle services are services connecting with just two or a few stops over a short distance. These may be used, for example, to connect a city and its airport. 2-car single-decker rolling stock will be used for these services.

XenRail uses the RA8-4 as the main rolling stock for the Sprinter services. This train, as well as our custom livery, has been designed by AutoDesignZ. The train features 4 cars and is an EMU, meaning it doesn't have a separate locomotive for power. Intercity services use the RA8-XenDeck, which was custom designed by AutoDesignZ for use by XenRail. It is a 4-car double-decker EMU train in a different livery, to make it easy to distinguish between Sprinter and Intercity trains. 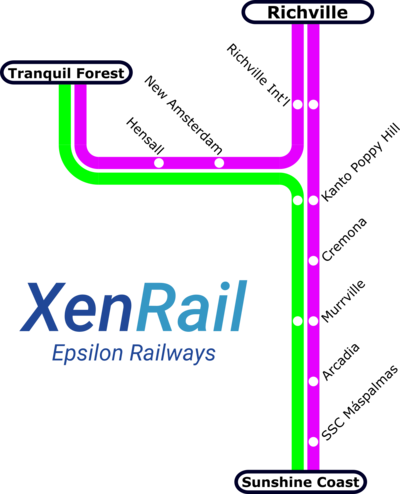 This line was mainly built to connect the network to Sunshine Coast.

New Amsterdam Central Station is the main transit hub for the city of New Amsterdam. From New Amsterdam you can transfer to XenMetro, the MRT Plains Line and SkyTrans has a helicopter connection planned on the roof. It is located in the Cairn Wharf district, notable for it's highrise and best known for the Shell Tower right across the street from the station.

The companies in the table below currently use Xenive-owned track for their services.