Difference between revisions of "Battle of the Builds"

The game show is an original idea created by MinecraftYoshi26. Its format originated from how MinecraftYoshi26 wanted to create a game show that focused on building and creativity, as one on the server did not exist. The title was selected from suggestions by daltdisneyland. 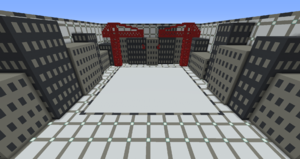 Competitors in the Build Off are given a large, empty plot to build in.

The Build Off is a secondary challenge in an episode to which builders who fare the worst in the Main Challenge are sent to compete. The Build Off is a speed build challenge in which the builders are given 10 minutes to complete a specified build using any blocks from the creative inventory. The first two minutes of the 10 minute build time allow the competitors to look up images online for ideas, if they would like to use it to do so. After the time is over, contestants must close it The type of build is chosen from a set of predetermined options visible to all builders. Each builder, starting with the one that fared the worst in the Main Challenge, chooses a certain number of builds to veto. The rest of the build options are then shuffled and the build for the Build Off is chosen by random selection.

Each competitor is given a large, empty plot that cannot be seen by the other opponent(s). At the end of the time, the host and, if applicable, other judges, choose the build they like the least and that builder is then eliminated.

Builders are prohibited from using staff powers, custom items brought in, and breaking any rules in challenges. Plagiarism of builds is prohibited. Using fast-clickers, schematic, or any other modification of vanilla building mechanics are not allowed. All rules and penalties are up to the discretion of the host.