Big Brother 1 is the first season of the reality series Big Brother. The season premiered on November 18, 2016 and ended with a season finale on December 18, 2016. This season featured 14 houseguests. MinecraftYoshi26 was the host. On Day 31, jphgolf4321 won the game in a 4-3 vote against frankbros429. The series lasted for 31 days.

The contestants, referred to as "houseguests," take part in several compulsory challenges that determine who will win luxuries and power in the house each week (each week may not be a real week, but rather a game week). At the start of each week, the houseguests compete in the Head of Household (HoH) competition. The winner of the HoH competition will select two houseguests to be nominated for eviction. Each week, six houseguests are selected to compete in the Power of Veto (PoV) competition: the reigning HoH, their two nominees and three houseguests selected by random draw. The winner of the PoV competition wins the right to either revoke the nomination of one of the nominated houseguests or leave them as is; if the Veto winner uses this power, the HoH must immediately nominate another houseguest for eviction. The PoV winner is also immune from being named as the replacement nominee. All houseguests vote to evict one of the two nominees, with the exception of the nominees and the Head of Household, who is only allowed to vote in the event of a tie, in which case they must do so publicly. This compulsory vote is conducted privately. The nominee with the majority of votes will be evicted from the house, after which the cycle begins again. Houseguests may voluntarily leave the house at any time and those who break the rules may be ejected from the house. The last seven evicted houseguests will form the Big Brother jury and vote for the winner during the season finale. Breaking promises and making alliances are allowed in this game. Typically, they are used to advance one game, and hurt others'.

Challenges occur separately, where each have a time frame to be submitted. Voting is also an open time window, where votes are to be cast and are sent to MinecraftYoshi26 privately. Houseguests are allowed to change their vote until all votes are in. If a houseguest does not vote in the time frame and makes no contact with MinecraftYoshi26, they can possibly be ejected from the game. There is no house to be locked in. All social interactions happen through any means, and the game is a side-game to daily server goings.

The season originally had each week be an actual week with a planned schedule; however, that was ditched as the wait time was unrealistic and the game would have spanned many weeks.

A random pool of ten or more players not in the game each week from weeks two to seven were to vote on who they think deserved the Care Package. Votes for who the public want to win the Care Package were cumulative. Care packages got progressively more helpful as the game continues. Once a houseguest received a Care Package, they were no longer eligible to win future packages. 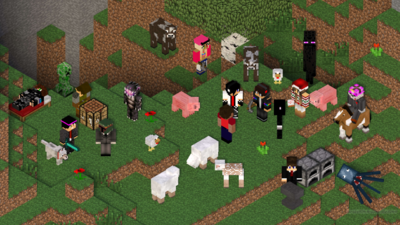