Difference between revisions of "Big Brother 4"

Big Brother 4 is the ongoing fourth season of the reality series Big Brother. The season premiered on June 22, 2019. This season features 17 houseguests. MinecraftYoshi26 is the host.

From week 1 to 7, the second and third placements in the Head of Household competitions would be rewarded. The houseguest in second place would have a chance an at 'encore', in which they get a second chance by being able to make a choice between two boxes: one having a power and one with a punishment. The one the houseguest did not choose would be available next week and the one taken would be replaced by a new power or punishment. The houseguest in third place would be the 'Audience of the Encore' and would get the choice of knowing the prize the Encore winner received or the identity of the Encore winner. 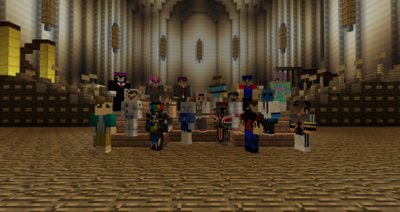 1. ^ All houseguests failed to complete this competition within the time limit. Thus, no Head of Household was crowned and a vote was held for nominations instead.

Specific votes will only be placed in the event of a unanimous vote or tie-breaking.