Difference between revisions of "Bristol" 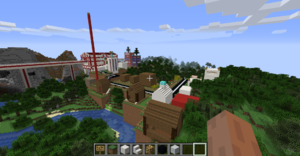 This is a screenshot showing how Bristol looked in its very early days of existence. It is from February 10, 2021, when Bristol was only just two days old.

Bristol is a town founded by Minecraft252 that is located at the WN45 MRT train station in MRT New World. It was founded on February 8, 2021, and features around 700 beds. Bristol was a town with no rank from February 8, 2021, to the evening of March 6, 2021. On the evening of March 6, 2021, Bristol began its new chapter of history in becoming a councillor ranked town. On March 14, 2021, Bristol became a mayor ranked town. On March 17, 2021, the WN45 MRT train station in New World got renamed from foobar to Bristol. On February 27, 2021, Bristol was featured on the first edition of the Around The World MBS program broadcast while Bristol was still unranked. The mayor of Bristol from the town formation to nowadays is Minecraft252, and the deputy mayor of Bristol is OttersMeep who has been the deputy mayor from March 7, 2021, to nowadays.

The location of Bristol is within Ward 9 of MRT New World. 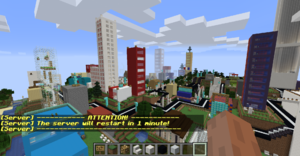 This is a screenshot of what Bristol looked like on March 1, 2021. 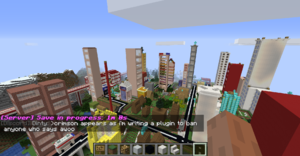 This is a screenshot of what Bristol looked like on its one month anniversary of existing on March 8, 2021.

The town of Bristol is currently divided into eight districts: Upper Bristol, Lower Bristol (which is entirely underground and has only a little bit of development), Oakwood, Downtown (which is all terracotta buildings and cobblestone walking paths), Uptown (which contains all somewhat colorful buildings), New South Bristol (which is home to several tall terracotta buildings, the Riverside Hotel OttersMeep hotel resort, and a few other tall buildings) is named in honor of New South Wales of Australia, Bristol Landing (which contains all terracotta buildings), and Bristol Village (which contains all brick buildings). The Oakwood district prohibits regular roads and travel within that particular district is restricted to only Bristol Greenway walking path trail network walking trail paths. The Downtown district does not contain any roads at the present time but does not prohibit roads within the district. Walking paths within Downtown are made of cobblestone. In addition to the eight districts, Bristol has three subdivisions: Bristol Park, Forestdale, and Llama Valley. Bristol Park features a train station along with several homes and access to Bristol Bicycle Highway is provided within the subdivision, Forestdale features several homes only, and Llama Valley features Bristol Llamaland, a location of Bristol Brew Coffee Company, a location of Chicago Style Gyros, and several homes.

The town symbol of Bristol is the diamond.

The town colors of Bristol are red, white, and blue. Many different places throughout Bristol proudly display one or more of these colors.

The town flower of Bristol is the tulip. Both red and white tulips are found prominently within Bristol.

Bristol features a local road network that includes Bristol Ring Road aka Not Short Road, Bristol Road, North Road, South Road, East Road, West Road, Bristol Landing Way, University Road, College Road, Otters Road, DNA Road, Furniture Road, Madison Road, Inglewood Road, Little Road aka Short Road, Village Road, Expo Road, Edgewood Road, Hendon Road, Forestdale Road, Llama Road, Uptown Road (currently Uptown Road doesn't connect to any other road within Bristol as it just connects to a walking path), and George Washington Tunnel. Bristol Ring Road is a local road that forms a loop around Bristol. Bristol Bicycle Highway opened within Bristol on May 4, 2021, and is currently the only bicycle riding path in all of Bristol. Currently, there are no road connections to the rest of New World from Bristol. All travel into and out of Bristol is currently achieved through train riding or flying.

Bristol has one public beach known as Bristol Public Beach. Two private beaches exist within Bristol: one at the Riverside Hotel OttersMeep hotel resort and one at Tuliptown Hotel Minecraft252 hotel resort.

Bristol contains six landmarks. Bristol Monument, Falls of Hendon, Bristol Gate, Bristol Flag Display/Diamonds In The Rough, Bristol Unity Wall, and the six letter Ts that are on top of the Bristol Theatre building are the landmarks of Bristol. Bristol Flag Display/Diamonds In The Rough is located within Bristol Oakwood Park. Bristol Unity Wall is located within Riverfront Park.

Bristol is home to Bristol University and Bristol College. There is a community college system located within Bristol known as Bristol Community College System. It contains five campuses: West (which also hosts the headquarters for the system), North, South, East, and Central. Bristol Private School, Perimeter Private School, Bristol Waldorf School, and John Legend Music School are the four private schools located within Bristol. Bristol is home to a number of public schools.

Bristool is a soda beverage that was invented in Bristol and contains six varieties of flavors: regular, diet, orange, chocolate, vanilla, and strawberry. Bristool is a take on the name of Bristol.

As of April 20, 2021, Bristol is home to several television stations housed at Bristol Television City located within Bristol.

On February 14, 2021, Bristol got its first sister city and to date only sister city: Riverdale.