Difference between revisions of "Chalxior"

Chalxior is a city located by the sea and is known of it's very modern building designs and it's resort like feels. It has a very big size, which makes it comparable to Fort Yaxier. Founded by Soso123, the city was basically showcasing how much the mayor's building skills has improved. Spanning from South Bay to Nex Cheti, the city goes across the whole of East Norlands. The city is connected to the rest of the MRT by the MRT Zephyr Line North and the MRT Lakeshore Line, Chalxior Waterport and RaiLinQ, with planned services from Four Seasons Railways as well. The city is currently trying to achieve the rank of [Governor].

Back in around 200AD, people found the area that Chalxior is in and called it Chalx. It was peaceful.

But around 700AD, Chalxions found that someone not from Chalx set foot in Chalx. They quickly built a small fort. As that's from a long time ago, it's buried under dirt. Chalxions are still attempting to find it.

At 732AD, a weird boat that looked like a pirate ship came from the ocean west of Chalx and attacked Chalxions. The small fort did everything to stop them, but sadly those unknown people destroyed Chalx. The survivors had to live in underground houses.

Around 2050AD, an incident happened. Astronauts at the space world carelessly activated a force machine that creates a weird beat. The bass dropped so hard that all the MRT players were teleported to the space world and fell down to the games world, and someone even crashed into the new world! Unfortunately, some players crashed into the secret time tunnel to teleport them to a 4D simulation environment with the time set as 2017, which everything done during the person is in the simulation will only become real when the actual time (frozen at the time) matches the simulation. No one will become older or whatever at the time. A player called soso123 crashed into the land of Chalxior and decided to redevelop it.

THIS IS JUST A JOKE

As this city is a futuristic city, it is fairly different from modern towns. Most roofs of apartment buildings has lasers that transport crystal energy to the apartments. In the interiors, you normally see glowing crystal energy powered fridges and machines. A future skytrain system supported by laser pillars will be constructed to connect Chalxior together.

It is the smallest district in Chalxior and only features small builds.

It is a residential districts with unique apartment buildings and houses. Featuring Narnia's Lonely House because "It's my personality" - Narnia17

It is mainly a shopping or tourism district. It has quite a lot of builds.

It is the government district with attractions. Features large franchises and builds.

It is "New city" in Chalxior. This district features more futuristic builds.

The waterport currently has the following services:

We currently have a few attractions in the city.

The convention centre features many exhibits such as: Fountain Of Gold, AFKPool, Heart Apple and much more.

The area has a lot of shops and is right next to the convention centre.

We have a beach right next to the waterport. It had everything you need in a beach and you can stay there as long as you can!

It is a lovely detailed library with a ton of books, and has a garden outside the library. Wouldn't it be nice when you just read a book and take a walk outside?

It is a large garden renovated from ancient Chalx. It now has some lovely statues, views and plants! You can have a picnic here as well! 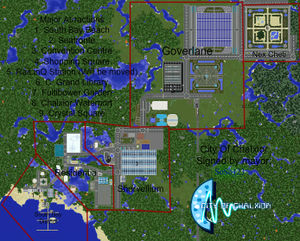