Elecna Bay was founded in early 2015, since then Elecna Bay has grown rapidly into the sprawling city it is today. However, no event has ever been held at the town despite the large array of facilities and services to offer within the city. Elecna Bay 2018 was founded to change this and show Elecna Bay to the server as a city of greatness and spirit where we strive for greatness, hence the motto It's Going To Be EPIC. The logo was inspired off the flag of Elecna Bay, the colours of the ocean, the sand and the sunset sky.

The large, modern infrastructure projects taken out by Elecna Bay are some of the grandest in the South-Central region of the MRT. Elecna Bay is one of the major stops along the A50 between many large cities such as Whiteley, Zaquar, Fort Yaxier and Wythern. Additionally, new roads in the region such as the A52 which are under construction will provide direct access to Central City and many of the cities in the central region of the New World.

Additionally, Elecna Bay is host to an extensive transportation network, with multiple metro and bus lines, a huge airport with hubs for the two largest airlines on the server, a large passenger seaport and rail from nearby towns. This excess of transportation makes travel to Elecna Bay seamless, decreasing inconvenience to travel to the Olympics..

Elecna Bay is home to many parks and recreational spaces, monuments and landmarks. Places such as Elecna Bay park featuring the old Central Park fountain, The Hope Tree symbolising the growth of Elecna Bay from a small desert settlement into the large town it is today or the boardwalk restaurant district with many local delicacies all within eye-shot of the planned Olympic Park.

The new developing sports district will also feature multiple park spaces and open plazas for locals and communities to take advantage of after the games. The prominence of beautiful spaces and wonders in Elecna Bay makes the town a great cultural choice for the Olympic Games.

Elecna Bay was one of the fastest developing towns in the south of the server and has strong regional importance in the southern regions of the server. The large scale urban sprawl can intrigue tourists and visitors all across. From the skyscrapers of Downtown to the small shops of Commercial Beach, Elecna Bay has lots to provide to all people and to the surrounding towns.

Furthermore, the city has never hosted any large event to date so none of these facilities have ever been used to present Elecna Bay in its brightest light to all. Due to the scale these Olympics are planned at, Elecna Bay 2018 believes it is time Elecna Bay has the chance to shine and inspire from its own borders. 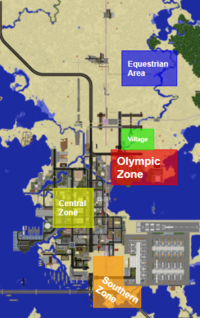 The majority of these venues will be split into three zones within Elecna Bay: Olympic Zone, Southern Zone and Central Zone. 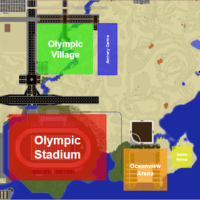 The Olympic Zone encompasses all of the venues within the Olympic Park in Kelvinside. It is located just 2 minutes from Centralen Station in downtown Elecna Bay on the planned modified T11 Javelin Express service. The park contains: 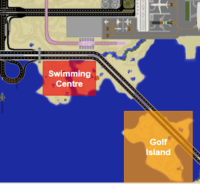 The Southern Zone will be located on the undeveloped southern coast of the Elecna Peninsula. It will feature 3 main venues including: 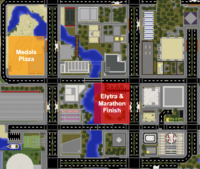 The Central Zone will be located in downtown Elecna Bay and use existing infrastructure for events. It will feature 2 main venues including:

North of the Olympic Zone will feature a large area dedicated to equestrianism and showjumping events. Due to its size, the area will become its own zone for the overall plan of the Elecna Bay Olympics.

The Olympic Village will be located in the southern edge of Kelvinside, an underdeveloped district of Elecna Bay. Because of the location close to the Olympic Park, many events will be located within 3 minutes of the Village, providing easy access for the athletes. The development of the Olympic Village will be used to assist the underdeveloped community of Kelvinside as well as provide investment into the re-construction of Kelvinside Central Station to provide more transportation links to the area.

The village in total will feature 3 main buildings totalling over 700 rooms which after the games would be used as public housing.

Planned improvements under the Elecna Bay 2018 Olympic bid will see:

A majority of the venues at the Olympic Zone will remain open after the games as a large sports district. The Olympic Stadium will be reduced in size slightly and used as a multi-purpose stadium which will become the centre of all sport in Elecna Bay. The Oceanview Arena will become home to a MLS team for Elecna Bay. The Sumotori & Golf course will continue to remain open unchanged. The Medals Plaza will be removed and adapted into a large waterfront recreational facility with a monument in tribute of the games.

The Central Zone will have most of its facilities removed however monuments and trails will be marked and created to commemorate the games and the events in Downtown Elecna Bay.