Difference between revisions of "Epsilonian Republic"

The Epsilonian Republic, or the Republic of Epsilon is a parliamentary democracy and is a collective of towns and cities which is in one unified country (Not to be confused with the premier city of Espil, which is not in the Republic). It's named after the MRT's server version, Epsilon, which expanded the New World. It was founded by ModernArt originally as the Norwestian Republic, but merged with the Hispania, which was lead by Fiork777 to create the Epsilonian Republic. It is now the 2nd largest nation on the MRT, after the People's Republic of Montego

Cities of the Epsilonian Republic

The Epsilonian Republic is a collective of towns, cities and dominions, which is under one unified country. They are all autonomous, with each town/city/dominion having unique differences between each other. They are divided into different regions, which are the equivalent of wards in the MRT. The more ranked* the town is, the more seats it gets (for example Councillor gets 2 seats and unranked towns gets 1 seat). Feel free to add your town down below if your town wants to or already is in the Epsilonian Republic.

(Number)* means that a town has been accepted more seats if the specified town has a justifiable reason (e.g size) to give more seats in Parliament with the approval of the President and the Prime Minister of the Republic of Epsilon.

The Republic of Epsilon is a parliamentary democracy, which has a President and Prime Minister as its main leaders. The position of the President is unelected, maintaining stability within the Republic and abstaining from politics. The Prime Minister is an elected position that is decided on an election. There are a few governing positions of the Republic, and these include (in order of significance):

The Presidency is the most powerful position in the land, as it can influence decisions for the future of the Republic. It is an unelected position and can be held for years to come. Its job is to hold and count elections, maintain unity in the Republic without stepping in politics and allowing the expansion of its public service, acquisitions and nationality.

The Prime Minister is an elected official position, meant to divide power to representatives the public from the President. This is to ensure that democracy is alive and well in the Republic. They must get a parliamentary majority to get the approval of the President to run the country. A list of various Prime Ministers is listed below.

Leader of the Opposition

The Leader of the Opposition is a political party leader which usually came second in a parliamentary election. This is vital in Epsilon politics, to scrutinise the Prime Minister in the House of Representatives who is leading the nation. The list is down below.

The Governor is an official position to lead a colony, territory, region or state in the Republic of Epsilon. Their job is to focus on local towns and cities and improve public services in the area, whilst maintaining stability and national pride in the region. They are:

The Epsilonian Republic has general elections for the Prime Minister, usually held between 6-12 months after the last general election. There are two houses of parliaments which facilitate the democratic will of the people, with the party that has most seats in the House of Representatives usually being the governing party.

The House of Representatives 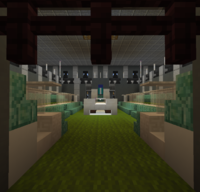 House of Representatives for the 1st Parliament of Epsilon

The House of Representatives is the only parliamentary body which is elected by the general public. It is where the Prime Minister answers questions given to him by other colleagues of the house and where legislation takes place. It is of a distinct green colour, that is shown below. Between the 1st of October 2019 and the 30th of October, the 2nd Parliament of Norwest will be the only governing body of the Republic of Epsilon. The House of Representatives requires a party to have a majority of seats in the House to govern, through the democratic will of the people.

The House of Peers 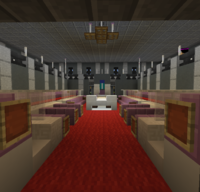 House of Peers for the 1st Parliament of Epsilon

Bill Listings of House of Peers