The first case of coronavirus in Sansvikk was confirmed on March 10, 2020, when a 39-year-old man travelling from Hendon reportedly became sick with flu. The city responded immediately, and warned all residents about a possible coronavirus outbreak. Four more cases were reported the next day, and train services from Sansvikk were cancelled. The city has advised residents to protect themselves, and declared a ban on travel for those in contact with an infected person, as well as the 'Creeperville Sultanate and New Bakersville'. Mayor SansNotLuigi reported that he and government officials made sure their top priority was getting everyone safe and creating a vaccine to the coronavirus. Infected were hospitalized at the Sansvikk Private Hospital. 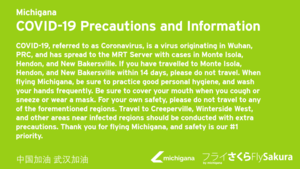 The Mayor of Foresne, i____7d, denied there being any cases in Foresne, and that security would be ramped up. He also suggested milk as a way to help stop the spread of the virus.

New Genisys decided to cancel all transport, and shut down the city. Though they suspect that they will be okay due to the city's remoteness, they are still taking precautions. Due to a COVID-20 outbreak on the MRT, New Genisys ordered an immediate shutdown of all transport to other cities. The train station closed and flights were cancelled. Any flights that were cancelled will be giving all refunds and any tourists to New Genisys unable to leave will be accommodated through shelters set up in the near future. Civilians will be checked every week by doctors for testing. This is preparation for any unexpected outbreak in the city.

The ban on Hendon citizens lifted due to no direct evidence of confirmed cases in Hendon. However, citizens of Hendon would be required to attend the 14 day mandatory quarantine. All guests entering Lapis Bay would be required to check and record their temperature daily. Failure to do so allegedly results in a massive $2500 fine.

Lapis Bay citizens are recommended to avoid travelling to cities with confirmed or suspected cases.