The MRTvision Screenshot Contest 5 is the ongoing fifth edition of the MRTvision Screenshot Contest. The contest is the original MRT Screenshot Contest with Eurovision style voting and representation. The ceremony is planned to place in the city of Arcadia, following lil_shadow59's win at the fourth contest with the screenshot "Parks and Recreation". The contest debuted on October 7, 2019. The slogan is Worth A Thousand Words. The winner is tentatively set to be revealed on November 16, 2019 at 6 p.m. UTC at the Arcadian Convention Center. There is planned to be an official MBS livestream for both the semi-final and final ceremonies.

As of October 8, 2019, 25 cities have confirmed their intentions to participate in the contest and 1 of those cities have made a submission.

The contest was teased on the wiki on September 20, 2019. The contest, with its slogan, was officially announced on October 6, 2019. The official logo was revealed on October 7, 2019. The logo is an edited version of an online image edited by MinecraftYoshi26. 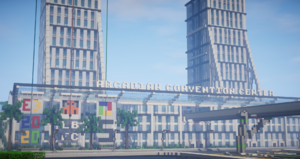 The venue of the contest, the Arcadian Convention Center, in northern Arcadia.

The contest's results ceremony took place for the first time in Arcadia, following Arcadia's victory in the previous edition with the screenshot "Parks and Recreation", taken by lil_shadow59.

It is planned to take place at Arcadia's lakeside 60-seat convention center, the Arcadian Convention Center, which was constructed in 2019 for the contest. Located in the north side of the town in the, at the time, newly developed area in Arcadia. It is a multi-floor, large indoor center with multiple halls for various multimedia purposes. The ceremonies are set to take place in the theater inside the convention center.

The deadline to join was revealed as October 20, 2019 at 7:00 p.m. UTC. The deadline to send in a screenshot is on October 26, 2019 at 7:00 p.m. UTC. After the semi-final reveal ceremony, the draw order will be selected for the final and voting opened for the final near the end of the ceremony. The winner will be able to influence the slogan for the next contest, choose the next host city, and receive $4,000. Second place will receive $2,000. Third place will receive $1,000. All competitors will receive $15 as a participatory stipend for voting. The top 10 will be featured on the website.

The occurrence of semi-finals is dependent on the number of participants.

The following cities participated in the fourth contest, but have not yet announced whether they will participate in the fifth contest: