The MRTvision Screenshot Contest 6 is the ongoing sixth edition of the MRTvision Screenshot Contest. The contest is the original MRT Screenshot Contest with Eurovision style voting and representation. The ceremony is planned to place in the city of Arcadia, following lil_shadow59's win at the fifth contest with the screenshot "15 Million Tons of Economic Power". The contest debuted on March 1, 2020. The slogan is Hub For Inspiration. The winner is tentatively set to be revealed at on May 9, 2020 at an unknown time and the Champion's Bowl. There is planned to be an official MBS livestream for both the semi-final and final ceremonies.

Prior to the postponement on March 7, 2020, 20 cities have confirmed their intentions to participate in the contest and 1 of those cities have made a submission. 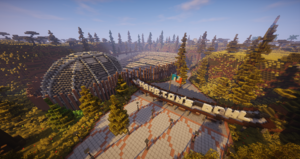