As of August 1, 2020, 41 cities have confirmed their intentions to participate in the contest and 40 of those cities have made a submission.

The contest was confirmed on the MRT Discord and the wiki on July 10, 2020. The slogan, alongside the venue and host city, was announced on July 11, 2020.

The logo was announced a few hours later. It is an original logo created by RacCort. This logo is the first logo that featured a new generic MRTvision Screenshot Contest logo.

For the first time, screenshots were submitted a Google Form rather than through Discord private messages.

Some of the deadlines for submission and voting were shortened from previous contests. This was due to other upcoming projects, according to MinecraftYoshi26. 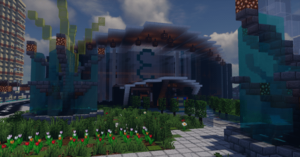 The venue of the contest, the Epsilon Theatre, in eastern Airchester.

The contest's results ceremony are set to take place for the second time in a town owned by RacCort, following Murrville's victory in the previous edition with the screenshot "Work Starts at Dusk", taken by RacCort. The most recent time a city owned by RacCort hosted the contest was for the first contest. As usual, the venue is required to have a stage, seating for viewers, and an optional location for a camera. On July 10, three venues from three cities were revealed as possible locations for hosting the ceremony.

On July 11, 2020, the host city and venue was announced as the Epsilon Theatre in Airchester and The Wave Theatre in Anthro Island was shortlisted. This is the first time that Airchester has hosted the MRTvision Screenshot Contest. The Epsilon Theatre is a 243-seat theater, which was constructed in 2014 and remodeled for the contest in 2020. The theater is one of the first built on the New World. In front of the theater is MRT Plaza, the landmark of Airchester. The closest modes of transport out of the city is warp rail at Airchester Central served by IntraRail and RaiLinQ.

The deadline to join was announced as July 26, 2020. The deadline to send in a screenshot was announced as August 1, 2020. After the semi-final reveal ceremony, the draw order will be selected for the final and voting opened for the final near the end of the ceremony. The winner will be able to influence the slogan for the next contest, choose the next host city, and receive $3,000. Second place will receive $2,000. Third place will receive $1,000. All competitors will receive $15 as a participatory stipend for voting. The top 10 will be featured on the website.

For the third time, there were pots created for semi-final allocations drawings. The 42 semi-finalists were allocated into seven pots, based on aggregate rankings by participant, not by city, from prior contest data. Drawing from different pots helps to reduce the chance of lopsided semi-finals by predicted placement from prior contests. The semi-final allocations were made on July 26, 2020, during a ceremony on Mumble held at Twitch Stadium in Airchester. Murrville's draw number for the final was also selected during the ceremony. Attendees placed bets in which semi-final they would be in and Murrville's draw number in the final for a small monetary prize.

20 cities are set to participate in the first semi-final. As the prior winner, Murrville voted in both semi-finals. The highlighted cities qualified for the final. The results are set to be revealed on August 8, 2020 at 6:15 p.m. UTC.

The following cities have yet to submit their votes for the first semi-final:

20 cities are set to participate in the second semi-final. As the prior winner, Murrville voted in both semi-finals. The highlighted cities qualified for the final. The results are set to be revealed on August 8, 2020 at 6:15 p.m. UTC.

The following cities have yet to submit their votes for the second semi-final:

21 cities are set to participate in the final, with all qualifying cities required to vote. Murrville automatically qualified for the final as the prior winner. The results are set to be revealed on August 15 or 16, 2020 at an undetermined time. The top 10 cities will have their screenshots featured on the website.