This table shows the status of all the projects and awards listed in this wiki page. If something seems wrong with the information, and not the formatting, please contact Johngi directly instead of attempting to fix it.

These are awards given out to areas or organisations which have proven to fit the criteria provided below. They celebrate the efforts of community and towns and give attention to areas which have dedicated their time to preserving or enriching the natural environment.

The AONB is an award given to areas on the MRT with, as the name suggests, outstanding natural beauty. The area must fit at least two of these requirements:

It must also fit all of the following requirements: 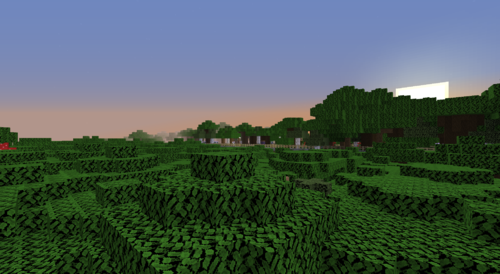 Sunset Peak is a dark forest near Storalisburg, run through by several paths and by a road, both of which serve as examples of how humans can cooperate with nature.
Qualifications

Areas that have qualified for an AONB may qualify for an AENB. An AENB is given out at the MAEC owner's discretion to areas that have shown to be far superior to others which have gained the AONB. Any AENBs are announced at the end of the month and their builder is given a $100 cash prize.