The city's main objective is to re-create a small suburban and environment-friendly town. The roads blend in with nature, and across the entire area you will spot a lot of grassy landscapes and trees. 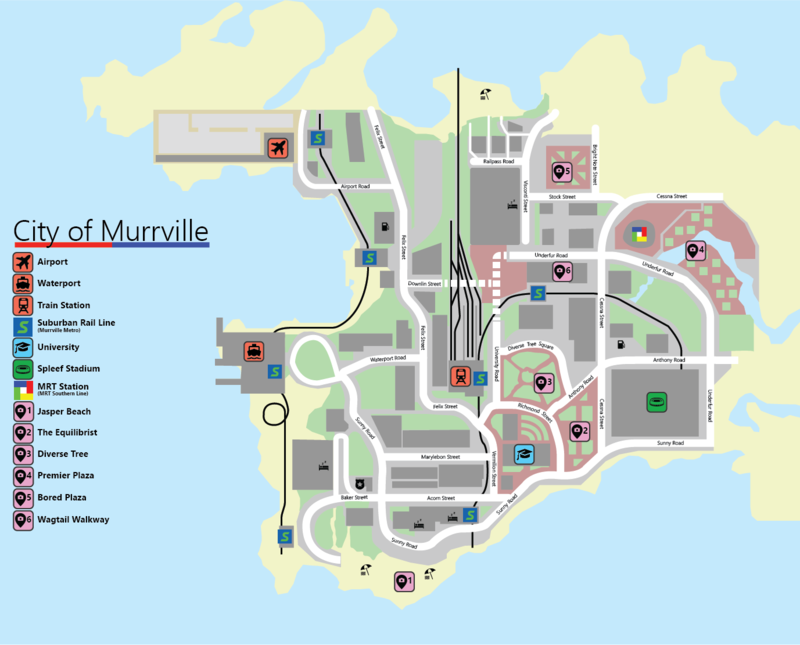 Murrville started after the opening of the new Epsilon World on the New World. It started with the name of Yiffville and stayed like that until January 2018, when the MRT Staff requested a name change. Murrville is situated in the south-east side of the MRT World. The city started construction on the seaside are of the South Sea, and then started expanding north.

The town reached councillor and mayor rank in less than 1 month, and got accepted for senator on the the 1st March 2018, after it's 1st attempt, and started the construction of it's local Regional Airport. On 28th February 2018 the city signed up to host the MRT Olympics (see Murrville 2018 Summer Olympic Bid)

Aerial view of the Diverse Tree.

Coordinates: 12415, 70, 16027 The Diverse Tree is Murville's main landmark. We are used seeing trees with leaves on them, big, mighty. But instead, we're left with a small, fragile tree with no leaves, but that doesn't block us from ssaying it's still a tree. The landmark reflects exactly this, the fact that no matter what we like, or what we do, we are still considered humans. Nowdays people are attacking other people because they don't like the same things as them, considered different, useless. Below the tree, signs recall lyrics from Keala Settle's single "This is Me".

Coordinates: 12445, 70, 15986 The Wagtail Walkway is a pedestrian street located next to the Dverse Tree Square. It's a long walkway with a lot of shops and restaurants. It is the main part of Murrville where you can go shoppping for souvenirs or just stop for a quick lunch or dinner. Famous franchises like Kalmar Fried Chicken, eGadgets and Hvt's Arcade are located in this area as well as other smaller franchises. The walkway extends from the 'Diverse Tree' to the 'Bored Plaza'.

Coordinates: 12464, 67, 16068 The Equilibrist is a representation of every man ever. The struggle each person has in it's life where t has to balance everything together, and set everything up so the world doesn't crumble down on them. The Equilibrist Plaza is a square next to the Murrville University. It is usually a hang-out place for people who like to play chess, and for students who exit the University. The garden you see at the plaza is maintained by the Murrville University, and you can usually spot students from the Biochemistry class examin the plants around the plaza.

Coordinates: 12464, 67, 16068 You're a fan of the MLS? The you sure need to check out the city's official spleef stadium. It is a small building, with not too many seats, but it has a fully approved field where you can battle your friends in a game of spleef. The field re-sets itself thanks to a command-block based command.

Coordinates: 12294, 64, 16220 During those hot summer days nothing beats a quick dip in the freezing cold sea. Jasper Beach is the main beach in Murrville. Cute little franchises on the seashore offer great cocktails and shots. The beach is open 24/7, that's why most of the parties are done here. Around that region you can find incredible nightlife and places to hang out.