Difference between revisions of "New Gensokyo"

New Gensokyo is a town growing at an exceptionally rapid pace. Founded on March 13th, 2019 by LegendOfYukari, New Gensokyo has an average of 2.5 buildings built per day (during the Spring of 2019), consisting of exceptionally wealthy condos, and luxury shopping centers. As of January 19th, 2020, New Gensokyo has 137 builds, and hope to project to around 175 before obtaining Governor (which will possibly happen soon.)

After LegendOfYukari (officially) joined on March 9th, 2019, he explored around the map for decent land far away from other cities. After further exploration, LegendOfYukari found a peninsula around a lake which only has one near by city, Svobodny. Construction started as soon as he obtained membership on March 13th, 2019, with the first building being the central parking garage. New Gensokyo is named after "Gensokyo" from the Touhou project, a bullet hell shooter series. Many locations have names based off the characters or locations from the Touhou project, (such as Jo'on tower). Within the first week, the city was all ready mayor sized, and the mayor all ready received endorsements for Councillor. Before obtaining councillor (pre April 5th, 2019), the city had 37 builds (main construction in the Financial District). The city was growing at a rapid paste, with newer and better builds being created on a weekly basis. Having confidence, the mayor sent in an application for Senator, and was approved on May 6th, 2019. LegendOfYukari had to take a different approach on how to construct the city after seeing many examples from older and higher ranked cities. This resulted in a the planning/foundations of the Central. Premier, and Eintei districts to make up for the lower quality builds of the older parts of the city. Originally being geared as a small remote town far away from the rest of the main regions of the server, the city now acts as a partial hub for Epsilon Northwest cities and connections. LegendOfYukari became inactive from June 2019 to December 2019 because of irl drama which significantly halted the construction of the city. Construction has been resumed as of January 2020. 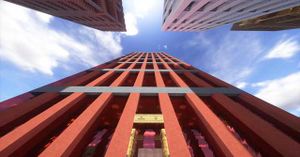 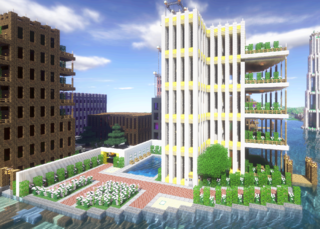 Downtown New Gensokyo is the first place to be built, which consists of 14 buildings. This includes Jo'on tower, a private gated estate in Downtown New Gensokyo, Sakura Library (no refrence), the city's library, and City Hall. Other builds consist of local shopping centers and apartments. A hotel is located at the entrance of the city near the city avenue, which connects the Downtown, West, and Financial districts of New Gensokyo. The Downtown district was completed on March 28th, 2019. Many rooftops however were changed to prevent low exterior scores on the Senator application, to prevent "boxy builds" as a problem in the city. Despite being a hub for most of the city, the Central District will replace the downtown district because many of the builds are still lacking exterior and interior quality (compared to the newer districts), alongside road issues (such as 3 block wide roads supporting main parts of the downtown district). The town hall will still be located in the Downtown Section of the city.

The West District is currently a high priority after its lower section has been completed in the early phases of the city's development. With ~20 builds (and plan to expand 2-3 times), the West District contains small townhouses and single family homes in the south and luxury hotels, apartments, and businesses and parks in the north. Another suburb (that wont be as time consuming as the suburb in the Lower Youkai Mountain) will be planned. A bus transit will most likely not be built in the West District because of the close proximity of the North District. The West district originally had connection plans to another unranked town, but the town is considered inactive and no progress has been made whatsoever, discontinuing the project. 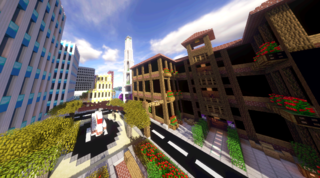 The main section of the Lower Youkai Mountain

The Lower Youkai Mountain District is a newer district of New Gensokyo. Founded on April 10th, 2019, it can be accessed via the Financial District (and soon the WIP City Transit which would connect this district to the Downtown district). The Lower Youkai Mountain district strays away from the common skyscrapers in the other 3 (existing as of April 16th, 2019) districts. In the main sector of this district Hvt's Arcade, alongside a greenhouse, party plaza (Crystal Ball Party Plaza), and the Shion Slums (will expand to another sector of the district) are all next to each other, giving a lot of variety in the district (despite the odd placement of these buildings). A wealthy neighborhood is located on the far right of the district with single family homes 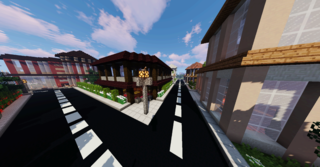 One of the suburbs located in the district

. A Soccer stadium is located in the district aswell. The Lower Youkai Mountain District was finished on May 2nd, 2019, with the bus transit station being the last build. The land below the Lower Youkai Mountain was originally going to be unclaimed, however do to size issues, the city will expand into the plains biome below at a later date. 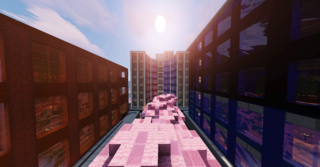 The North District is currently the largest and newest districts in New Gensokyo. The majority of the North District was built after the city received Senator (May 6th, 2019). Unlike the other districts, the North District is dedicated towards commercial franchises (both owned by LegendOfYukari and others), which gives the district a cultural feel when visiting. Starting from the west side, the North District starts with the Department of Transportation, which doubles up as a bus stop (this route is coming soon and will be available when the mayor submits an application for governor or when the mayor decides to actually do business with a transport company). The Yagokoro hospital is located right on the lake and can be seen from anywhere from the city. A small suburb is located on a hill west of the rest of the district, containing two houses and two franchises. The middle section contains the cities elementary school, Cascade Golf course, and the 100th build monument 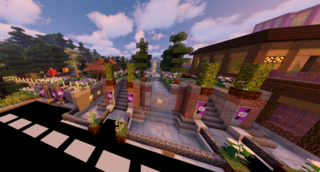 One of the many commercial hubs in the North District

The Upper Youkai Mountain is a planned district. This district will consist of small suburbs and a ski resort. 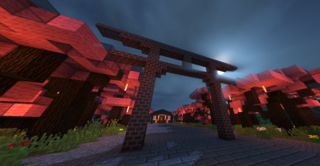 While New Gensokyo is currently isolated from the majority of the server, the city has many plans to increase city, regional, and international transportation. As of now, there are Helipads having direct flights to Sunshine Coast and Utopia. More connections will be added soon once New Gensokyo enters its city phases. New Gensokyo has a highly decorated avenue that acts as a highway that connects the West District, Downtown District, and Financial District. A city transit now exists and serves a bus route going from the North district to the Lower Youkai Mountain District. the bus route however is not fully complete and will be fully complete later on. On May 5th, 2019, a rail project spanning major Northwest cities has been planned by CaptainObi, with New Gensokyo included on the rail line. The city will finally receive connections from other towns such as Carnoustie at an unknown date (as the project seems to be stalling). The New Gensokyo City Ferry is currently the best way to get around the city (including incomplete and planned parts). The ferry opened on June 6th, 2019, and currently serves the North District, The Upper Youkai Mountain District (the ferry is located in the North District), West District, Premier District (planned), and Eintei District (planned). The ferry buildings can be identified with the acacia wood roofs. It is possible that the Taiga Line will be approved at the next GSM, which will result in the city finally being connected by MRT. 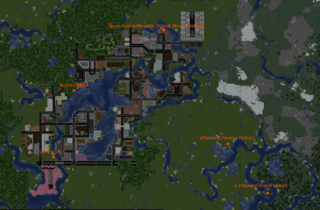 The ferry system in New Gensokyo. Despite all connections being available, only 3 are considered to be connected to completed parts of the city

After LegendOfYukari received senator, construction on the regional airfield has started. This airfield serves several cities (most connections are to Larkspur). However due to planning issues, the airfield will remain in an incomplete state due to reservation and building issues. The airport is located north of the North District. 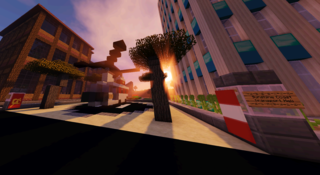 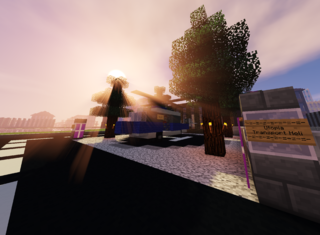 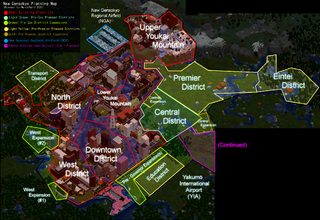 Plans and expansions of New Gensokyo. These plans are accurate as of early June 2019

Currently the majority of city plans are based around quality builds to obtain Governor.

- Completing Commercial Interiors in all districts

- Create More unique builds that are not just boxy apartments

- Make sure that all franchises not owned by LegendOfYukari are completed

- Have a goal of 175 builds pre-Governor

- Creating a ski resort in the Upper Youkai Mountain District

- Central District (Will replace Downtown due to the lower quality of builds.)

- Premier District (Southeast of the Central District, this district will be the last to be worked on)

- Eintei District (Dedicated for builds that fit in a Taiga biome. Most of the builds will be smaller homes and shops. Ill possibly build another golf course there)

- Education District (dedicated to a few apartments and a university. This district is considered to be a lower priority than the others, and will be built in the later phases of construction.)

- New Gensokyo is based off Gensokyo from the Touhou Project, a series of bullethell shooters and fighting games.

- New Gensokyo is proud to use stacking as a method of construction.

- No staff members were harmed in the stacking of buildings.

- The city's flag was completed before the city was founded itself. Sadly due to the amount of detail, it was hard to build a proper flag in the city itself. The flag will be redone when the city grows.

- Originally New Gensokyo was going to join the Kaktus Republic but backed out to pursue in other political groups on MRT.