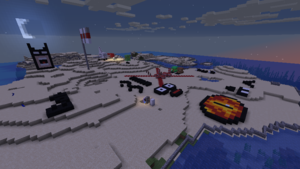 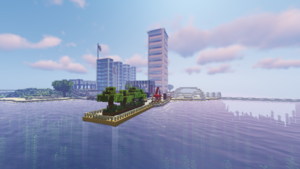 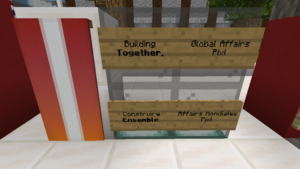 As time progressed, people started building more things. Some people were planning out roads, some metros, some stations, and some skyscrapers. The first skyscraper to be built was the Pixl Global Affairs Tower, built by Seshpenguin. At 81 meters tall, it doesn't reach some taller skyscrapers, but it can stand out as one of the tallest in the area. This started a huge skyscraper rush, as people started using more and more space leaving no space for smaller builds, meaning the only option was up. A competition soon began to see who could build the tallest skyscraper. The first skyscraper to break 100m was Seshpenguin's Clios Condos, which was 107m tall, then the next tallest was Airplaneguy9's Dept. of Aviation headquarters, coming in at a narrow 113m. But that did not compare to the next tallest building. Built by Weier and TheSubway, the next tallest building in New Singapore was the 27-floor Housing and Development Tower, at a whopping 186m, almost an entire skyscraper higher than the previous tower. This made it the second tallest building in Nansei-Gunto at the time* (i____7d's Epsilia HQ in Kazeshima comes in at 190m).

Finally, Airplaneguy9 took back the title two days later with the Lecture Tower expansion, bringing it to 192m tall, and the tallest building in Nansei-Gunto. The expansion is over 100m taller than the original building.

*A metro station is under the HDB Tower, and a mall is being constructed as well. If you include the basement when measuring height, then the HDB Tower would still be considered as the tallest building in New Singapore

A huge building boom ensured by almost 30 people over the next 24 hours after the town was built, leading to the town becoming Councillor-size very quickly. Departments were established very quickly, but everyone involved at the time knew that the Housing and Development Board, or the HDB, which was led by Weier and TheSubway, held a monopoly over the town; their main building was the tallest in the city. Skyscrapers roamed the cityscape, and districts plus roads were quickly put down. The rapid expansion attracted more and more people, and soon earned the city the nickname New Hong Kong for just how many skyscrapers there were. Among the skyscrapers were the beginnings of a town hall, a Hindu temple, and a beach-house that served as the HQ of the Director of Random Helping. 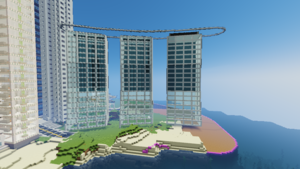 However, many saw how the city was beginning to take up more and more of the island's space. They had already built over half the island in just 24 hours. And so, the city turned to land reclaiming. The first blocks of wool for reclaiming land were placed on May 13, and the first worldedit happened an hour later. By May 15, around 25% of land was reclaimed, with 40% of new land from wool-marked spots that had not been worldedited with land yet. Plots were starting to be taken fast, and there was almost no space left to build. The solution was defined in Airplaneguy9's Emergency Protocol Seven (read Geography and Topology below). This was acted out upon in put into place effective May 14, 2020, and Weier and Yellowitcher began construction on a bridge to the snowy mainland, just 200 blocks away.

Other notable constructions included a metro system, an embassy tower and the Marina Bay Sands hotel.

On May 14, at around 18:15 GMT, Airplaneguy9 decided to host a fireworks show. Recorded by mi_aquamarine, the show was a success, and those involved included Weier, MPolo455, Seshpenguin, Yellowitcher and fork_07. The show was hed to commemorate 24 hours of the existence of the city, plus the huge success it got, those involved, and for the future of the town.

There are plans for another show to be held when a mayor is elected. While this show was small, the next one would be 'even larger', according to Airplaneguy9.

On May 16, LKRandom, seeing that there was very little space to build anything, decided to build an artificial island off the coast of New Singapore called Pulau Sentosa. This island was quite large, and would have boosted the available land by up to 20%. However, when asking staff to fill in the island, staff refused. Eventually, with the community split into two sides over whether the island should stay or go, LKRandom abruptly cancelled the project, ending the drama. 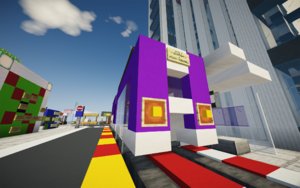 Initial proportions for transit within the city was roughly planned, with a line running north-south of the island-state and an east-west line running from the port to the east of the city, complemented with a circle line looping the southern island. While the construction and operation of the metro was directly tendered towards LimeTransit and FLR Corporation, propositions from foreign companies, National Transportation and Bluebus, had proposed to plan, construct and operate tram and bus routes separately. 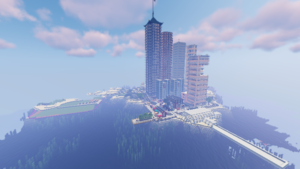 New Singapore sits on a tiny island, which is not very big, and can barely support the town. As space runs out, the city has turned to land reclaiming. It is estimated that over 30% of the land is reclaimed or worldedited. Emergency Protocol Seven allocates emergency funds to the building of a bridge to the icy mainland, to facilitate growth for the city. Although this was supposed to be a last resort, construction on a bridge has started.

There are not a lot of lakes and rivers, but they do exist.

** This only applies to buildings above 50m tall