Difference between revisions of "New World"

The New World is one of the six worlds on the MRT Server and was introduced on 4 October 2014. It is currently the default world for new guests and the world to build towns and acquire ranks.

The New World is divided into 9 wards to facilitate the New World Highway System and the Vermilion Postcode System. 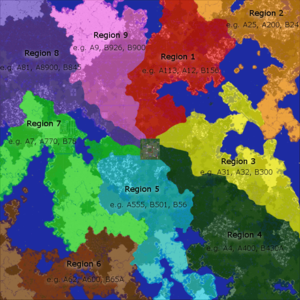 Discussions about additional worlds began as early as May 2013 such as the addition of a Nether World. After searching for plugins that handle multiple worlds, the MRT Staff decided on creating a second larger overworld map that would implement a newer version of the Minecart Rapid Transit System. The introduction of the New World would be complemented with a revised rank system to revive permissions for player creations previously restricted on the Old World due to its smaller size. The New World map was chosen from 94 candidate seeds. [1]

At the November 2016 GSM, Frumple unveiled a new server machine named Epsilon that would allow the New World to be expanded on December 2016.

Note: the Marina Shuttle is considered as a branch of the Expo Line.

While Frumple solely built the Old World MRT System, MRT Staff were tasked to build the New World MRT System. The lines were built in consideration of future extensions to towns and cities that are not served by the MRT lines.

Four additional MRT lines were planned to be built in order to connect the extended portions of the eleven initial MRT lines. As of November 2017 the Northern Line and the Eastern Line are fully operational while the Southern and Western Lines have yet to be built.

Two additional MRT lines were proposed by chiefbozx in 2015 but are currently abandoned or cancelled.

After the New World expanded on 26 December 2016 as part of the Epsilon server update, plans such as new lines and extensions of current ones have been made to expand the MRT System to the new Epsilon territories.

These new lines take place at the far eastern and far western reaches of the server, being: