Difference between revisions of "Oparia"

The Republic of Oparia, commonly known as Oparia and the City of Oparia, is a city and republic founded by KyleFrb on the north portion of the New World and is within Ward 1 of the New World Ward Borders. It was founded on April 5, 2020 and is still being developed. Oparia is a founding member of the Metropolitan North Association.

Oparia is divided into large boroughs and zones within those boroughs.

The Central Borough consists of Unity Island, Holiday Island, and everything south of the junction between the River Jade and River Amethyst but north of the O-1/A1 Freeway. It is the main borough being worked on in Oparia at the moment. Any address in the Central Borough will have the postcode OP1 CN[x].

The Downtown Zone consists of everything east of Government Valley (Diana Street) to the coast. It has many skyscrapers and tall buildings. Any address in the Downtown Zone will have the postcode OP1 CN1.

The Uptown Zone is anything below David Street. It is currently planned. Any address in the Holiday Island Zone will have the postcode OP1 CN5. 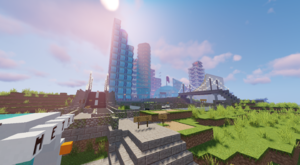 The Osten Zone consists of everything around Osten Drive. It is the furthest south Zone in North Shore Borough, situated on the River Jade. The Osten Zone has a Mojanghood Community between Osten Drive, Del Río Drive, and Deadbush Road. ManuF_moj helped in the construction of the Osten Zone. Any address in the Osten Zone will have the postcode OP1 NS1.

The Seaport Zone is situated on the southeast of the Borough facing the ocean. This the place of the future Oparia Seaport. Any address in the Seaport Zone will have the postcode OP1 NS3. 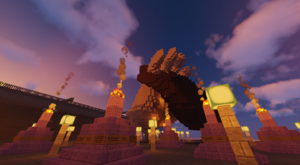 The Ballard's Point Zone is situated on the north of the Borough facing the swamp and ocean. It is the place of future luxury homes. Any address in the Seaport Zone will have the postcode OP1 NS4.

Within Central Oparia, which is the downtown/CBD area of Oparia enclosed by the O-1/A1 highway, there is a simple road standard.

All roads, except in certain circumstances, have two lanes going one way. The next parallel road will go the opposite direction.

All roads going north or south are assigned a feminine name that corresponds to the letter of the street, in terms of how many streets there are east of it. For example, the furthest-eastern road that goes north or south is Alice Street, which is assigned a feminine name that starts with A. The next street over is Belinda Street, so on and so forth. 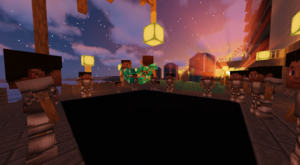 The Oparia Department of Transport has or has planned a network of highways that are designated as O-[x]. All O roads with single-digits are freeways with the capacity for high speed traffic, which are called "primary O roads." All O roads with two or three digits are designated as major, but not freeways. These are called "secondary O roads." These can range from expressway standard to single-carriageway roads. The first digit in a secondary O road will always correspond to the number of the primary O road it will connect to. For example, the O-18 would connect with the O-1.

Note: the O-1 overlaps with the server-wide highway A1 within the limits of Oparia.

Transit within Oparia is organized and administered by the Oparia National Transit Authority (ONTA). Any ONTA service requires the possession of an ONTA card. All ONTA services have faregates. 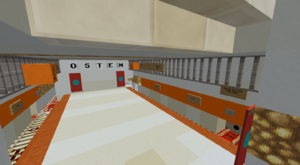 The vast majority of transit in Oparia is being planned, but Line 1 of the Metro is completed, with plans to add more stations in the future.

There are multiple ways to get into Oparia, and many planned.

EliteNeon's Shadowpoint Navy boat on Adam Street provides transport to New Mackinaw and the former Epsilonian Capital island. It has plans to move to a larger boat in the Oparia International Seaport at Gate C3. 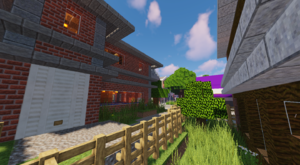 The Osten Zone at noon in the North Shore Borough.

Hummingbird Boat Lines currently operates the  26  Larkspur Line at the Oparia International Seaport between Fort Yaxier, New Bakersville, and Gray Cloud at Gate A3. Hummingbird also has inactive boats at Gates A4, B3, and B4 with plans to add the  40  Hyacinth Line and the  50  Aloe Line.

The A1 server-wide highway is currently being expanded to Oparia and will go over the road currently numbered as O-1 highway.

The ONTA Rapid will be a warp rail service leaving from Oparia Central Station.

Oparia is a constitutional republic and representative democracy consisting of three independent and co-equal branches of government: Legislative, Executive, and Judicial. Elections are conducted every two years. Oparia is divided into Districts consisting of roughly the same population each. The Legislative Branch consists of a unicameral Oparian Congress. The Congress consists of three representatives per district and these representatives are elected through preferential voting. The candidates elected can be from any official party or independents; there can be more than one candidate from a party elected to serve a district. Every election cycle, the representatives of the Oparian Congress elect a Speaker of the Congress. This Speaker of the Congress, commonly known as the Speaker, is in charge of organizing legislation to be voted on and to represent the Legislative Branch to the public and to other branches of government.

The Executive Branch consists of a single person ho serves as the President of Oparia and can veto or enact bills and acts from the Legislative Branch and is the international leader of the country. The President can be removed with a two-thirds vote among the Oparian Congress.