Difference between revisions of "PMW Commuter"

The temporary area maps below are courtesy of autobus22. 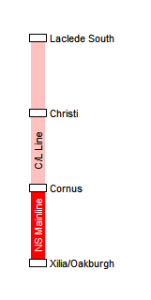 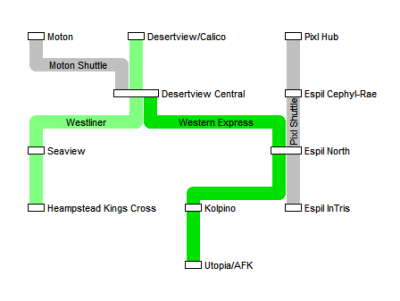 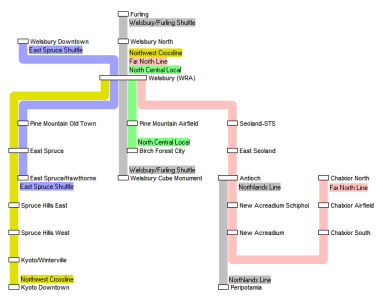 The Western Express is an intercity service in the Mid/Western part of the server running between the PMWC Hub station in Desertview and Utopia/AFK in Utopia.

The Central-West Shuttle is a medium length line, unusually long for a shuttle line, that runs between the PMWC Hub station in Desertview and Dekuville via Moton and Aquamarine Bay.

The Westliner is a north-south line operating in the SW section of the server, from Heampstead north to Desertview and possibly Vegeta in the future

A short 3-stop service between Cornus and Laclede, operated by unjinz_ under PMWC.

A short line from south Welsbury to Furling via a loop around Welsbury's Harbor.
NOTE: The path from WRA station to the airfield is temporarialy blocked while the airfield is edited

A short Line from PMW City to East Spruce

A nothern local line that connects to the network in Antioch

The Mainline of the PMWC network for the server's northwest quadrant. It presently operates in two isolated segments.

Short shuttle line from Espil to Pixl and possibly further north and south.

Planned or Under Construction Lines

The following lines are either yet to be built or are under construction either actively or semi-actively, some will be unnamed and most will have no description.