Difference between revisions of "Palestropol"

Palestropol am See (commonly known as Palestropol) is a town located at  V16  Foobar. It is the capital of the Federal Republic of Polytan. It is situated in a forest biome, with several hilly areas. The suffix "am See" is german for "at the lake", whereby Lake Palestropol is meant.

The Polytan National Transportation Authority is in charge of all public transportation operations; This includes the Metro. 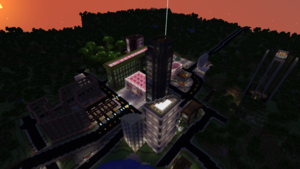 Palestropol was originally created as Vontague in 2016. Vontague, ditched by ondist for other towns, was unfinished and ugly. ondist decided that it would be the right decision to flatten Vontague and replace it with a new town, as with the increased density of towns in the New World owning MRT Stations relatively close to Central City grows a certain value. Not wanting to give up  V16  Foobar, Palestropol am See (am See meaning "at the lake") was established and flourished quicker and better than Vontague or any other town ondist had built. Today, Palestropol is ranked [Senator] and aspiring to go higher.