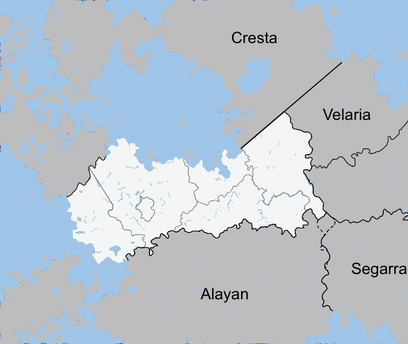 Map of the First Sedalian Republic and its bordering states

The newly independent Republic of Sedalia led by president Alexander Robertson was a huge success. Many people began enjoying the many benefits of the new country. Many were finally happy that everyone was treated fairly. The capital was moved to the brand new city of Alana. The country's economy began to grow and its population began to increase. Furthermore, trade and commerce was increasing. However, President Robertson wanted more influence, and wanted to show that Delacia wasn't weak. To increase influence, Sedalia joined in the Altean Civil War in 1945. Many were supportive of this, however as the war turned seemingly unwinnable, many were against the war. The president continued having Sedalia fight in the war. As public opinion drastically shifted away from staying the war, many were calling for the resignation of president Robertson.

Eventually, President Robertson resigned due to outside pressure from anti-war groups. After that, vice president Mason Newman took office. Newman was loved by the people. He pledged to remove Sedalia from the Altean Civil War, to repair the broken bonds between Sedalia and Velaria, and to increase relations with Alayan, which was now the Democratic Republic of Cuyamaca. On July 6th 1946, Sedalian troops in Altea were sent back home. Then, on August 12th 1974, a Cuyamacan embassy was placed in Alana. Meanwhile in 1983, the Velarian government under president Yuri Volkov issued a referendum on annexation into Sedalia. With a total of 94% "for" votes, Sedalia then proceeded to annex Velaria as an autonomous republic on September 23rd, 1996, with Volkov becoming its governor. Velaria then became an official province of Sedalia in July of 2004. 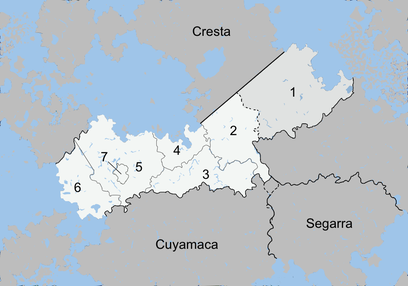 Sedalia is split into 5 different provinces, and 1 federal district. Each province can govern itself for most of the part, but are still affected by national law. Provinces can represent themselves in the national congress.

Sedalia has several overseas territories. These territories are similar to provinces, but do not represent themselves in the national congress.